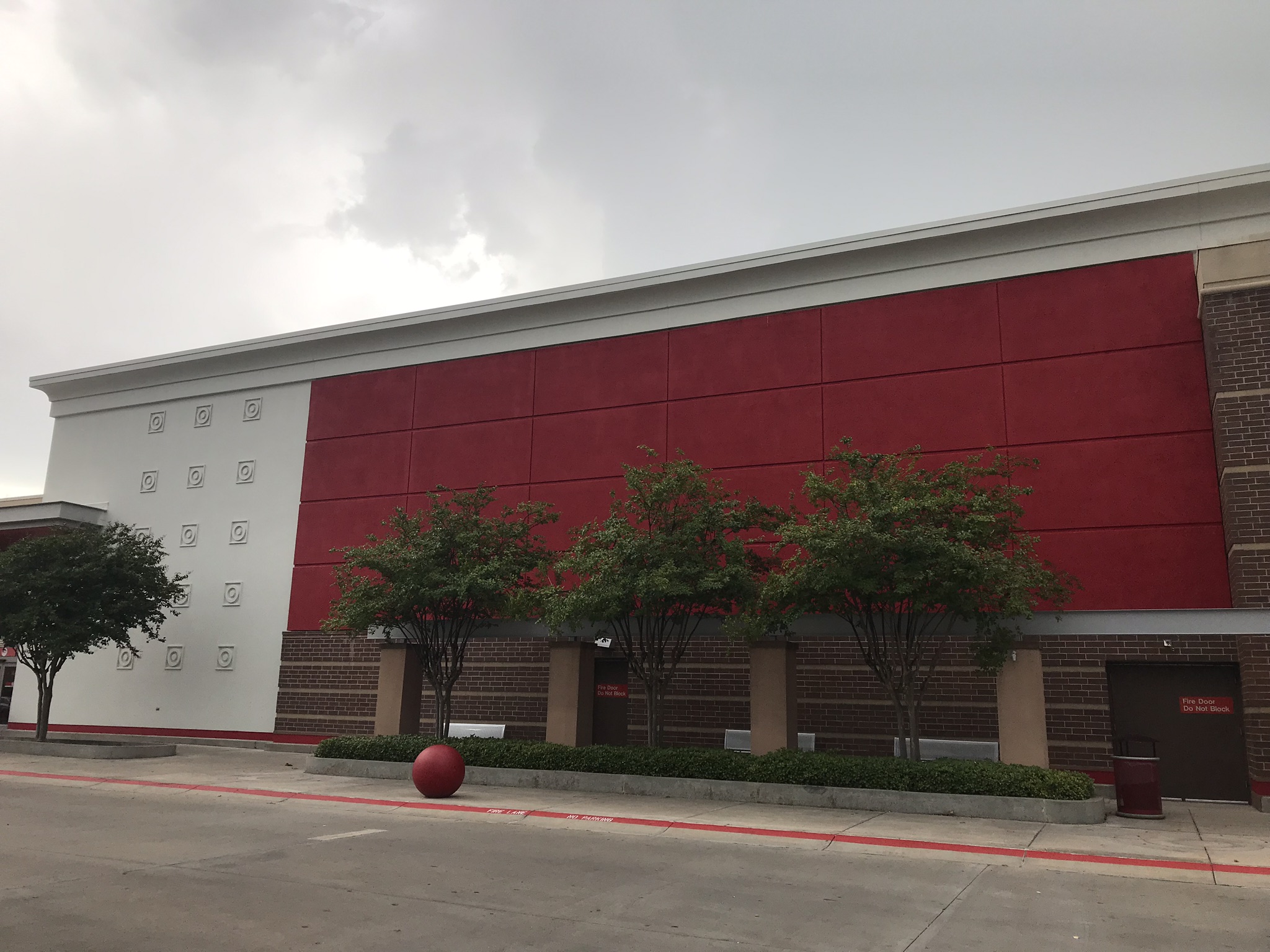 During my recent blog post about the Super Target downgrade in Missouri City, I realized that another Super Target may have fared a similar fate. Looking back through my photos, I found some of the Super Target at Eldridge and Westheimer during construction. I wasn’t paying a great deal of attention at the time, but looking back at them now, I believe the grocery section may have been shrunk.

My reasoning behind this lies partly in the full renovation that kicked fresh grocery out of its home, and behind the cash registers. Secondly, the website now resembles the Missouri City one in terms of departments, deleting Expanded Grocery, Bakery, and Deli. I’ll have to make a trip back to confirm but my suspicions are relatively strong.

This Super Target was one of the few Hypermarket style stores left in the area. This brings the count down to the Walmart on Kirkwood and the one on Highway 6. Hopefully limited product selection will not cause too many issues, but it is a bit sad. As when I lived in the area this Target was always a good place to get just about anything you needed. 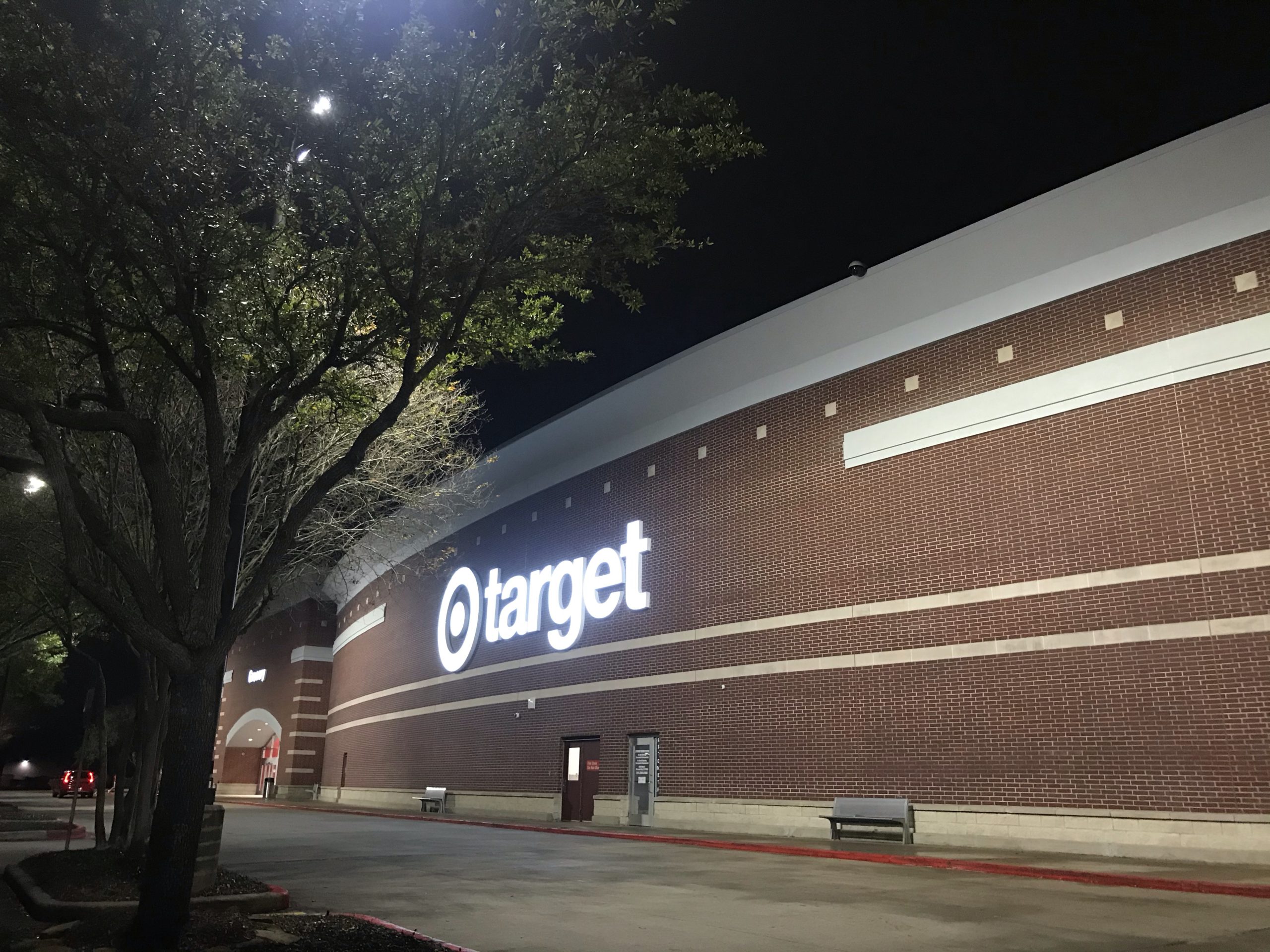 Target recently finished a large number of renovations on their Houston area stores. This was done to help bring their image up in line with their more up to date locations. It’s actually part of a nationwide effort to cutback and aid underselling locations.

Edit: I have received word from a reader that this same conversion took place at the Baybrook Target.

The general Southwest area received an expansion of Super Targets in the late 90s. With locations in Houston, Pear Land, Sugar Land, and Missouri City to name a few of the numerous upgrades. However a recent trip to the Missouri City store revealed a surprise, the store has been downgraded! It seems that grocery was not preforming well and the store was downsized to help remedy this. 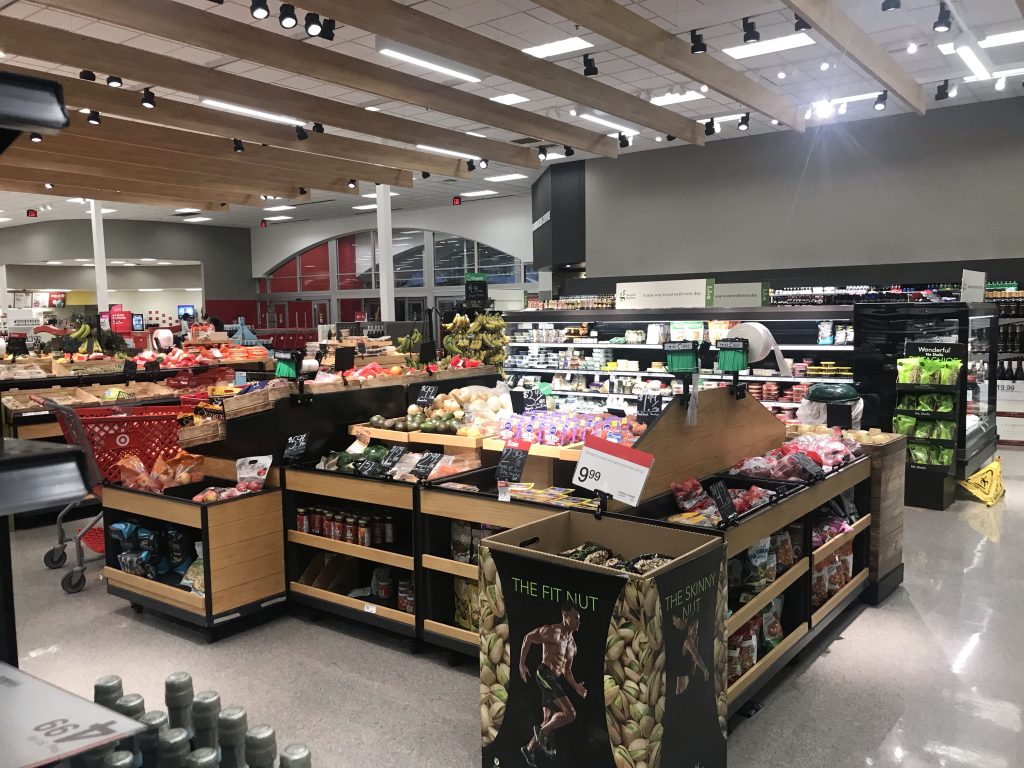 You might notice that for a Target this is a better than average P-Fresh department, that’s because most of the P-Fresh locations in Houston are actually undersized compared to normal. The fixtures were replaced for this conversion and scales along with weighted produce sales were discontinued. The conversion also meant reducing dairy cases down to one shared one, and freezers were consolidated and moved forward.

Outside of the grocery downgrade this is still a very nice store. Honestly it’s much quieter than the Sugar Land store and easier to shop. The downgrade is a bit of a shame and means I can’t reliably grocery shop there anymore. I do think that with the way Missouri City and the Western area is expanding there is a small chance grocery could one day make a comeback, but it’s a slim chance. Till next time! 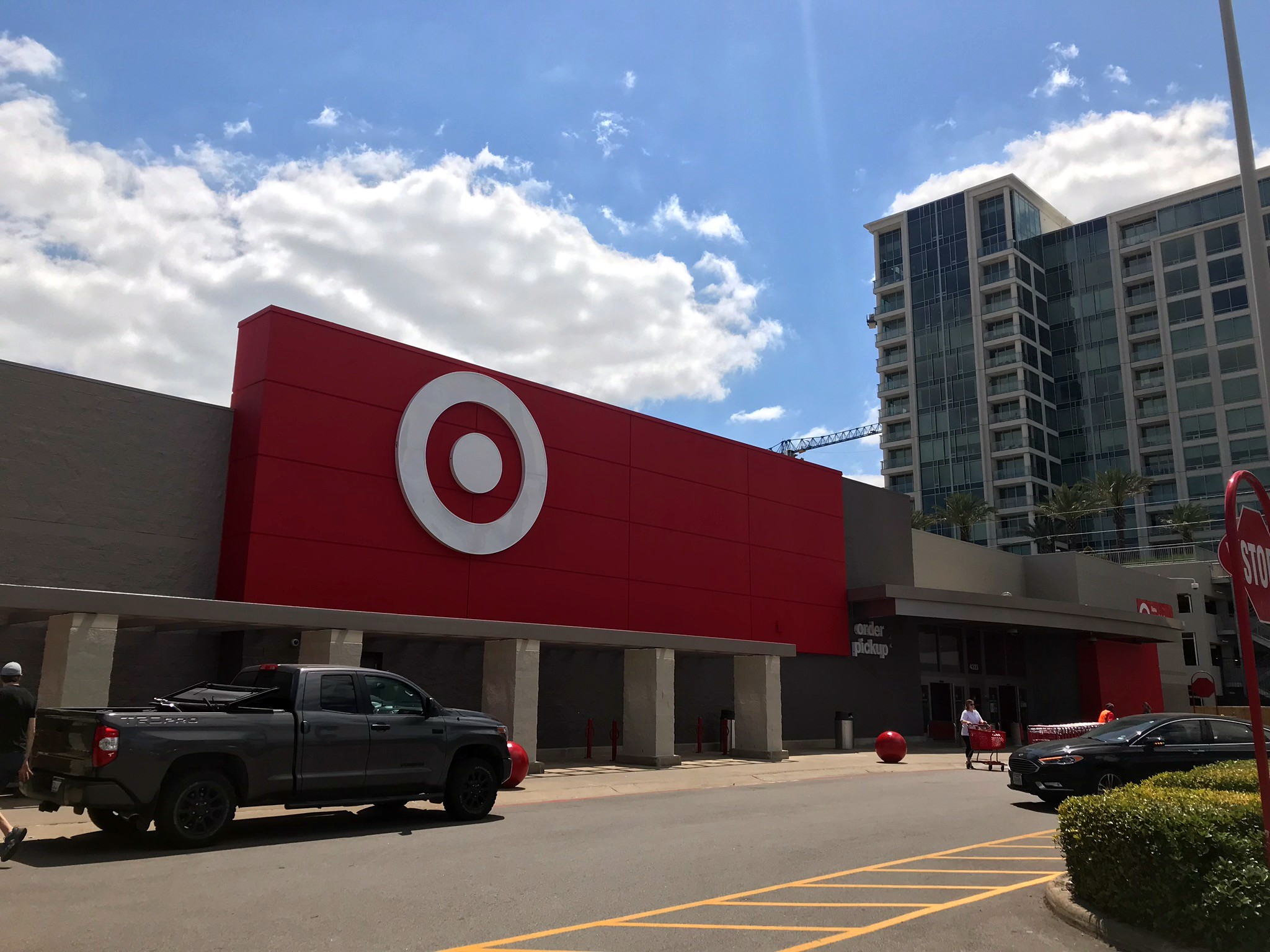 Take yourself back to the early 2000s, now try to remember, were there any Walmart locations inside the Loop? There was a location just where the canceled Bay City Freeway stub jabs in to 610, but that was on the outside of the loop. In fact, until the 2012 opening of the Heights Super Center, there was no Walmart presence inside of Loop 610. That meant if you needed clothing, a TV, and snacks all in the same trip, you were stuck with going to Target. While over the past few years Walmart has increased their inner loop presence, they still don’t match the number of Targets within 610. With the large number of Targets, and lack of any real competition. Target’s Inner-Loop stores aren’t exactly the nicest.

The exception to this rule has always been The Galleria Target. While not actually located in the mall, the reputation of the Galleria as Houston’s premier shopping district this location means this location gets spill over traffic. While some of the customers do live in the surrounding “River Oaks” areas, a large portion of traffic comes from international shoppers hitting up The Galleria. 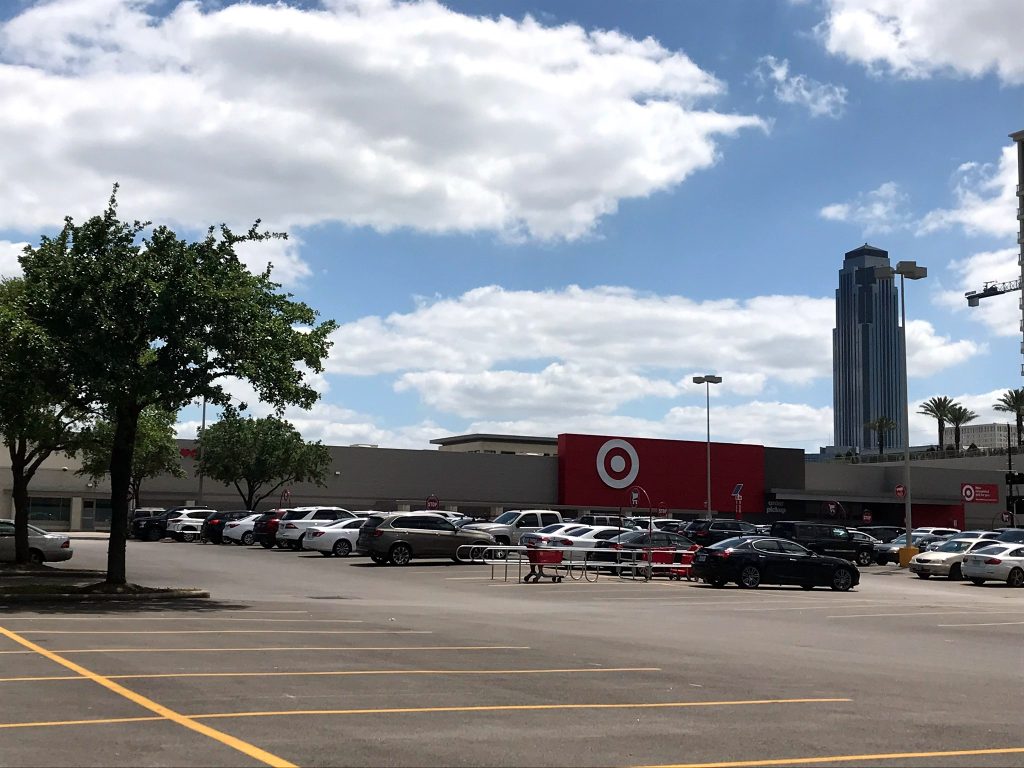 The exterior of this location received its first major exterior update since P-Fresh added a dedicated grocery section in the early 2010s. Target seems to be going very minimalist with their new design.

Almost all text has been removed from the building, however you’d have no issues identifying this as a Target. Some small text based signs do still exist for “Order Pickup” and “CVS/Pharmacy” but those are hidden off to the sides and under other design elements. 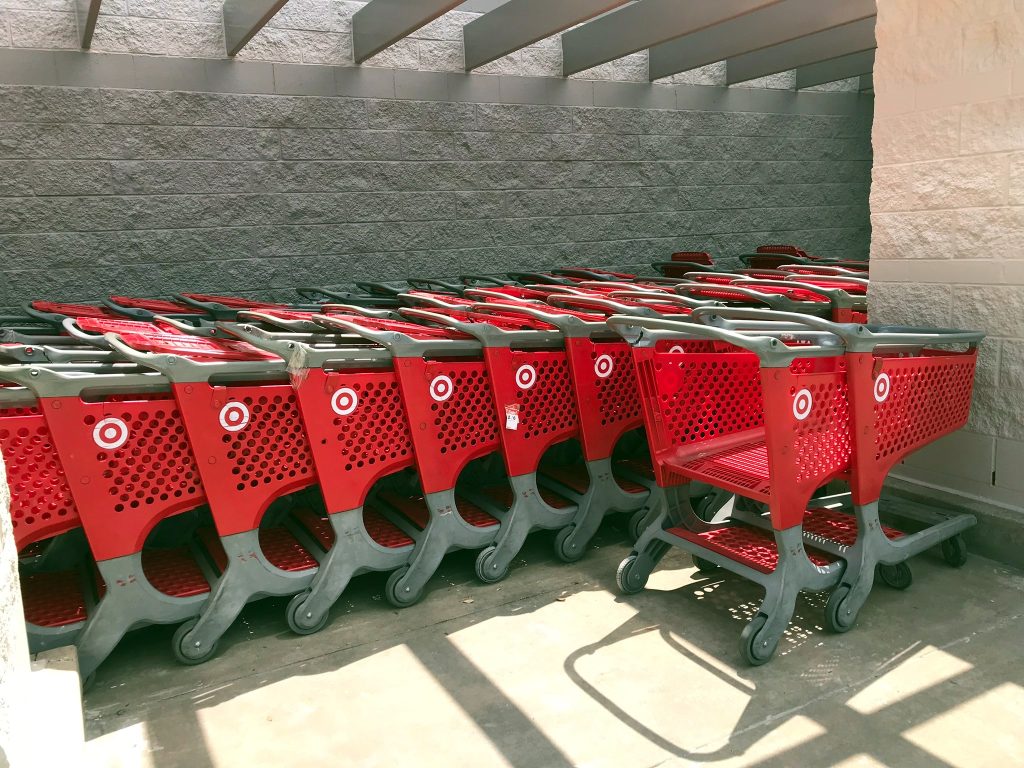 The plastic carts are on the way out! Target was one of the first retailers to introduce a completely plastic cart. While they preformed well initially, the bodies were subject to cracking which rendered them useless. 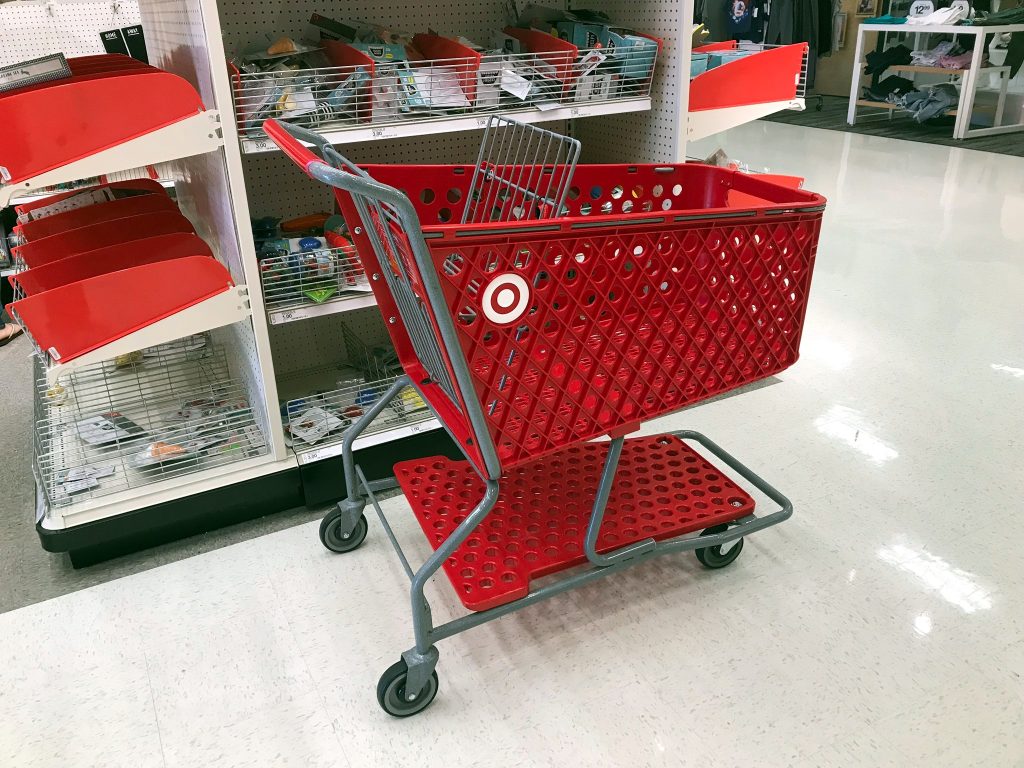 The new carts look somewhat similar to the carts Target had prior to the plastic ones. They use a Metal frame with a plastic body. Entering the store you can immediately tell that something has changed in this store. It look me a bit to figure it out, what exactly was different here. Many of the full size floor to ceiling displays in the girls section have been removed allowing a view all the way to the back wall. 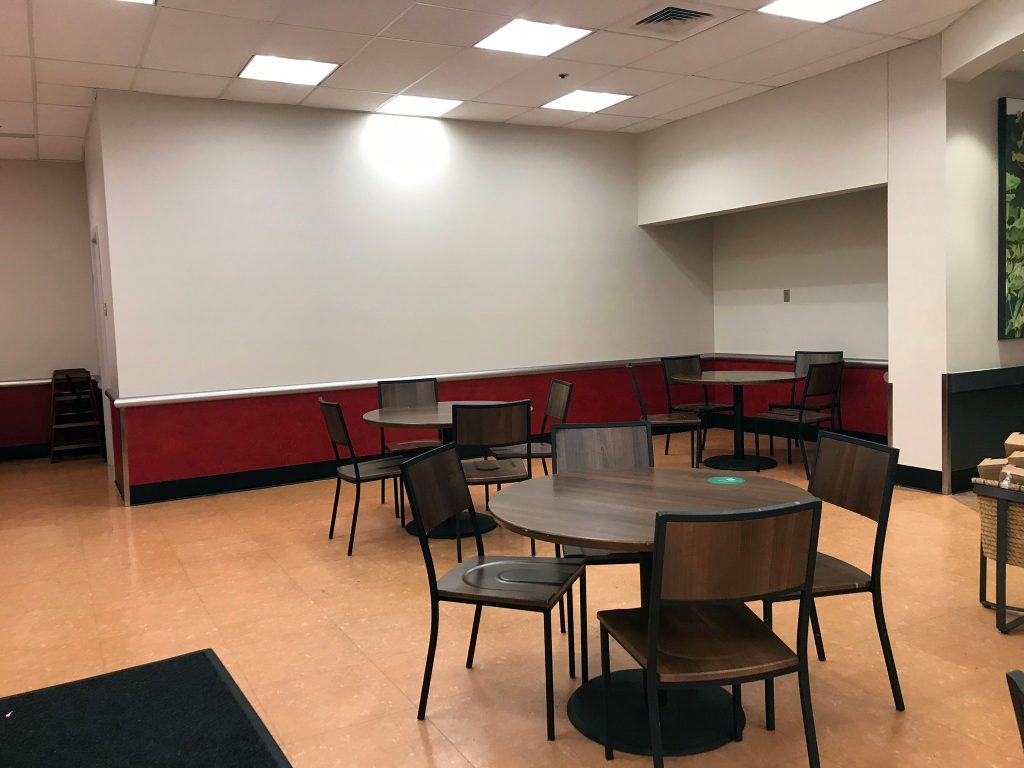 Across from the Dollar Spot, we find the former Food Avenue. During the P-Fresh Remodel a separate Starbucks counter was added. After the most recent remodel, the Food Avenue was removed. The Soda and ICEE machines are still there and operating. The Starbucks counter might sell the cups for those, but it was too busy to get a picture. 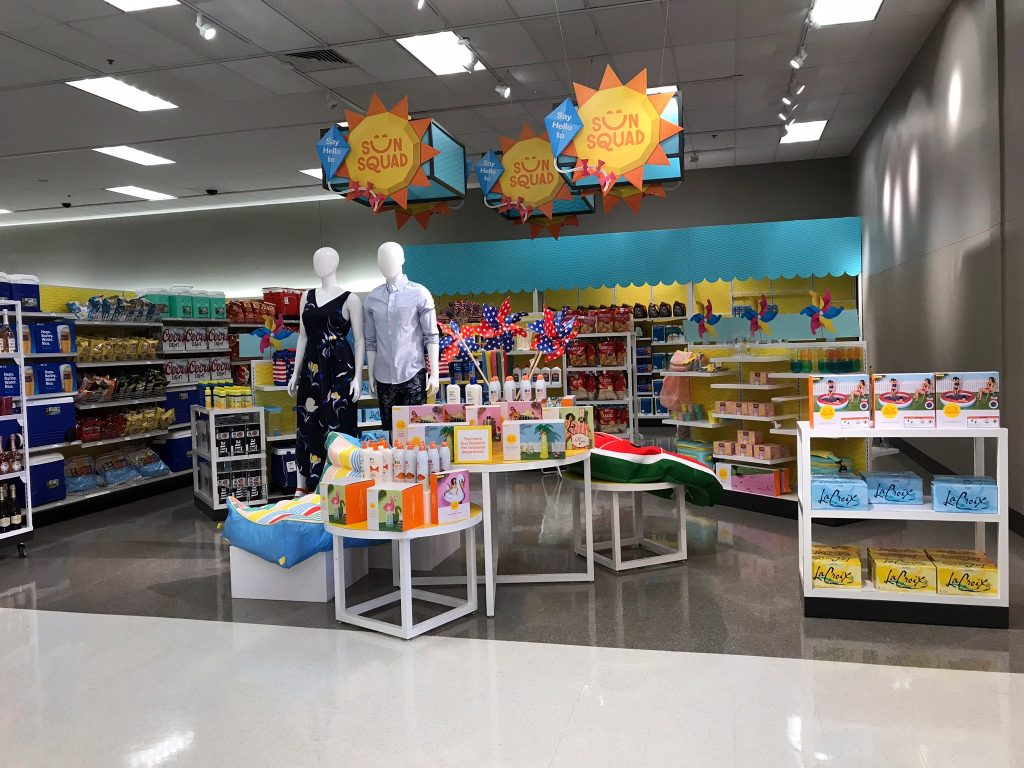 Right outside of the former Food Avenue, and in what was Women’s Clothing, is the new location of Target’s Seasonal Merchandise. For many years the Galleria has had their Seasonal selections all the way in the furthest corner of the store. 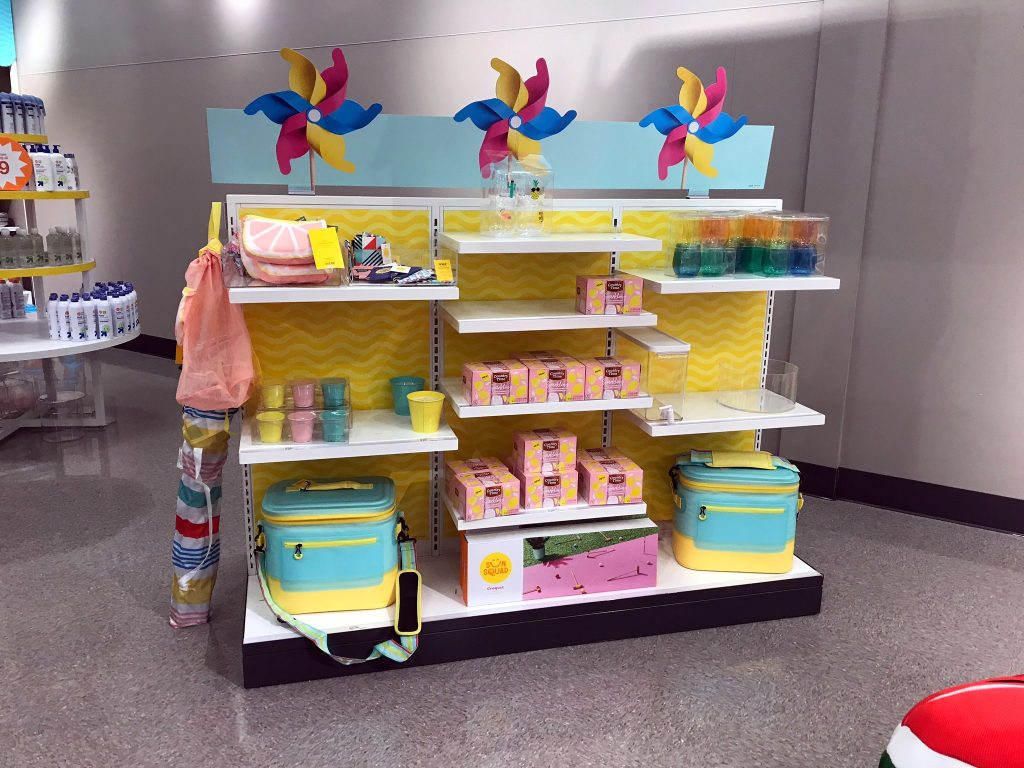 Notice the new flooring replacing the carpet. This flooring is just used the Seasonal Section, to help with the fact that the displays are all static and can be moved. Stepping out of Seasonal and looking to the back of the store, notice that what used to be Women’s Clothing all the way back and to the right, is now Kitchen Supplies. Women’s Clothing does continue to take up the space on the left side of the aisle. This back wall display is REALLY big. Especially for something you’d see in a Department Store. You wouldn’t expect anyone to be able to reach up and grab the plants on the top shelf, but I guess Target wants to build a tall clientele. The “Bat Phones” have survived another remodel at Target. The last time I needed to use one, the associate informed me that they are timed as soon as someone picks up the phone. Presumably trying to guilt me in to never using it again. The Toy Section received something I haven’t seen in a while, Toys mounted for play! Not just the obvious buttons and spinners on the shelf, but the yellow and pink voice transmitting pipes. These used to commonplace in Toy Stores, good to see places like Target picking up the slack. Pet Care has been moved next to the Hardware department, both of which were given new signage. This signage was first rolled out to the Super Target locations, and is now being implemented on all remodels. This was taken with my back towards the groceries facing down the center aisle. The lights and displays are all new, it looks a bit cluttered from far away. Although close up it’s not that bad. The central displays help me to make the case that Target is stepping up their display game. They’ve always been ahead of the curve, being one of the first stores to introduce “body positive” mannequins, back in the late 2000s. Now they’ve upgraded their displays to something you’d see at a mid-level department store. At this point, it honestly looks better kept than the last couple of Palais Royals I’ve been to. Heading around to the front of the store, the path breaks into two forks near the Pharmacy. The makeup selection at this Target has always been upscale, but it looks like they’re going for a store-in-a-store feel. The reason the path breaks into the aforementioned forks is to make room for another central display. However the one in the photo above is actually from back in the center aisle. Heading out to the checkouts, notice everything has been replaced. From the belts to the lighting. The only original elements appeared to be things like the battery holder, and drink coolers.

Going to this Target was an experience. It felt more high-class then I had felt at a Target in the past 15 or so years. It felt more like Target did when I was a kid, with the glaring lack of a Snack Bar. It makes me greatly sad that I can’t get popcorn at Target anymore, but the future does look nice.