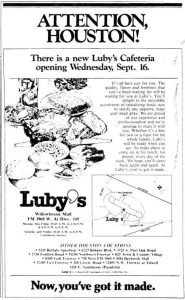 For many years, Luby’s was one of the three non-food court eateries at Willowbrook along with Ruby Tuesday and Casa Olé. The Willowbrook Luby’s opened during the short time in between the opening of the anchors and the opening of the mall itself. Oddly enough, Luby’s map of the mall includes the outline for the Macy’s that would not open until 1984! Houston Chronicle, September 9, 1981