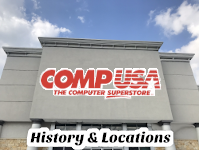 CompUSA has its history as a company out of Addison (A Dallas suburb) named Soft Warehouse. By the 1990s computers had completely left the hobbyist market, and most P.C. sales took place either at specialty shops or chain electronic stores. Big Box Chains were often “brand-restricted” meaning they wouldn’t carry a competitor’s hardware or software. Specialty P.C. shops were generally the answer to the variety question, but prices were sure to be much higher. Soft Warehouse aimed to combat that issue by providing lots of variety, while keeping prices low by sticking to Computers and Accessories.

By 1988 the company had expansion on the mind opening a second store in Atlanta. Plans for a third location soon came to light with Houston being selected as the next city. This new location would be the the anchor spot of the recently completed Pavilions Shopping Center. With an all mirrored glass front, only being broken by a single white stripe for signs, the center provided a unique home for Soft Warehouse. The store was an immediate success, essentially holding a monopoly on the Houston market.

In early 1991 Tandy was focused on expanding their similar Computer City concept, with Houston again being an early market. Computer City acquired two locations of the failed Highland Superstores  To help broaden their appeal Soft Warehouse decided to rename themselves CompUSA in early 1991.