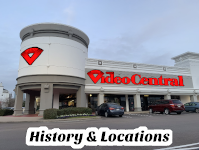 Take a trip back to the early 90s and put yourself in a mindset where the VHS is the most affordable and widespread home media format. VCRs had recently become cheap(-ish) devices, with the real money being made in renting the tapes they played. When thinking back to the heyday of video stores most Houstonians probably have a mental image of a Blockbuster or Hollywood Video. While these two were around the longest they weren’t the only competition in town. HEB wanted to develop an experience defying every expectation of in store video rental you’d ever had. That was the goal of HEB Developed Craig’s Video Central.

While this commercial is under the HEB name, the Craig’s locations were indistinguishable.

The stores started in the San Antonio area, where HEB had experienced tremendous growth. The idea quickly spread along I-35 up to Austin. The video shops outside of Houston used the name “HEB’s Video Central” were quickly successful. They were praised for selection, price, and most of all convenience. With how well the video stores were doing the corporate leadership decided the next move was to try and creep into Houston. However they first had to overcome two obstacles. First, Randall’s had already developed a very successful in-store video rental chain. Second, was a lack of space in their stores. At the time HEB was focused on building the Pantry Foods chain in Houston. The footprint on these stores was tiny, lacking delis, butchers, and bakeries.

The decision was made to continue to push the video stores into Houston. Although, there  would be a few changes. They would be build separately from the grocery stores, but still in the general area of an H-E-B. They would also try to push music, and VHS purchase in a similar way Blockbuster did. The “H-E-B Video Central” name would initially be used, as they hoped to rely on brand recognition. This would be quickly dropped for the Craig’s name.