The Deauville Fashion Malls are truly an odd duck amongst Houston area malls. Chances are, if you clicked on this page, you probably either know exactly what the Deauville Malls were, or you have no clue; there’s likely no in-between. Despite great intentions, backed by a strong Houston-based property development firm, the Deauville Fashion Mall experiment is widely regarded as a failure. There’s little redemption to be had even today, nearly 40 years later. The tale starts with the Deauville Corporation of Houston, which was initially in the business of building apartments. Deauville got its first taste of building a shopping center via Deauville Place. This was an apartment complex connected to a 125,000 Square Foot Shopping Center developed by Deauville in the up-and-coming Greenspoint area. As it was the company’s first major venture in commercial realty, an outside firm was brought in to help them plan out their new shopping center. The new complex would feature Randall’s as an anchor tenant and be located on I-45 between West and Aldine Bender. It proved to be a quick hit with the growing community! Deauville’s first taste of commercial realty would inspire multiple similar shopping centers without the apartments. Their centers would include a grocery anchor and some sort of Junior Department Store. Complimented with restaurants and boutique shops you’d usually find in a mall, like Radio Shack. The initial joint venture with the shopping center developer would lead to three new regional shopping centers. It seems that this newfound success would quickly get to Deauville’s head as they had grandiose plans in mind for the Northside of Houston. 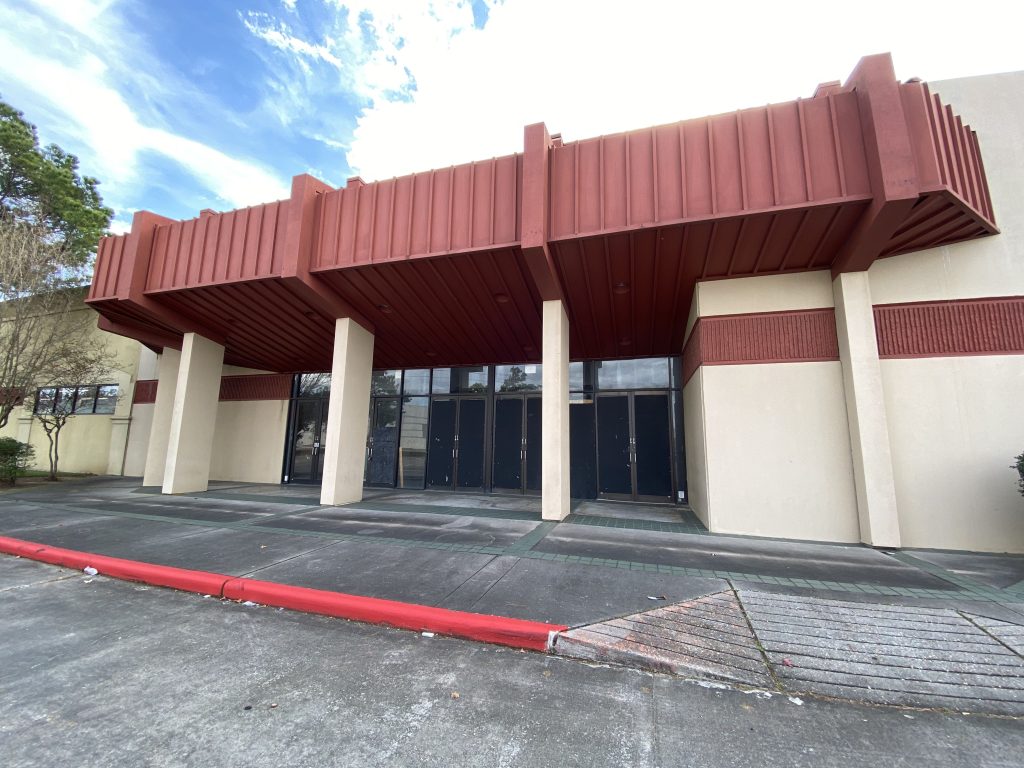 The next chapter of Deauville’s plan was to build a mall, but not their Fashion Mall concept, rather a standard this was planned be a standard regional mall. In 1973 the Deauville Corporation purchased a large plot of land along FM 1960 near I-45. The plan was to develop a full-scale mall that would compete against the soon-to-open Greenspoint Mall. While Deauville had proven itself competent through shopping centers, this would be its largest project yet. During the development of Greenspoint, Federated (developer of the Greenspoint and owner of Foley’s) had been approached by Montgomery Ward about adding a location at Greenspoint Mall. Federated rejected Ward’s, citing a preexisting agreement with Sears. Deauville Corp. learned of this and began to court Montgomery Ward into signing on as an anchor at their proposed 1960 & I-45 mall. With a lack of mall experience, Deauville’s plan was a tough sell to Ward’s. During negotiations, Melvin Simon, national mall developer of Galleria-ownership fame, was brought into the project to help mediate an agreement between the two. Eventually, Deauville would possess a flimsy agreement that gave Mongtogomery Ward most of the control and many opportunities to abandon the project. Ward’s immediately took Deauville’s offer to Greenspoint and proceeded to “wave it in their face” until Greenspoint agreed to allow Montgomery Ward to become an anchor as part of an expansion at the now-open Greenspoint Mall. Leaving no anchors for the aptly named ‘1960 Project’, Deauville and Melvin Simon both dropped the project, and a lawsuit was eventually brought against Wards by Deauville.

During the next few years, no talk of a mall or shopping center development was undertaken by Deauville, with the company likely wrapped up in a furious legal battle against their former prospective anchor tenant. However, in the early 80s, Deauville would move forward again with another mall concept. This time, there would be almost no press coverage of the goings-on, likely due to the court battle, which was going through appeals at the time. However, in 1984 the beans were spilled by the Chronicle on the first Deauville Mall at I-45 and Cypresswood. While little was known about the new mall, it was touted as the first of three ‘Discount Malls’ to open in the area. They would be anchored by off-price fashion retailers, but little other information was given. Only a few months later, the first of the three planned Deauville Malls opened. This was the Spring Deauville Mall which featured Designer Depot and Siegel’s Fashion as major tenants. Coming in at only around 300,000 Square Feet, including the anchor tenants, this first mall was a small-time deal compared to Deauville’s previous ambitions. In addition to the anchor shops, several boutiques lined the mall’s interior, along with a small food court. Few of the store names were major brands, and I have a decent suspicion some of these stores were started off as turnkey operations by the Deauville Corp with a plan to sell them to operators. Despite the off-brand nature of most stores, Deauville was able to get some national retailers like Spencer Gifts which operated in all three Deauville Malls for a little under a year before moving out.

The two other announced Deauville Fashion Malls, Meadows Place (59 and the Beltway) and Webster (I-45 & Bay Area Blvd), would open soon afterward. These newer locations would implement a movie theater, and Hardware Store, directly into the mall area, bringing up the total size of the closer to 400,000 Square Feet. Each grand opening would feature special guest Monty Hall to play a life-sized board game based on the Deauville Mall Shopping Experience, giving away prizes like tickets to Hanna Barbera Land, Gift Certificates for Mall Shops, and a Brand new Car! Despite all the fanfare, there was already a revolution brewing outside of the Deauville Malls. Just as quickly as these three locations had popped up, new Discount Malls quickly made their way to other parts of town. With some, like the Buyer’s Market Mall, directly competing with Deauville. To help bolster the Spring location’s image, an expansion was approved to add a Hardware Store and Movie Theater via an adjacent strip center. In a retrospective at the end of 1984, Deauville had mostly positive comments to make about their malls. While they referred to them as a learning experience, Deauville believed in the concept with out of state discounters arriving en masse. Unfortunately, though for Deauville newer discounters like TJ Maxx and Ross were unwilling to sign on to any kind of mall.

The small comment of referring to the malls as a learning experience would be one of the first indications that things weren’t turning out exactly as planned for Deauville. While the company kept a tight lid on negative press, it seems that out of the 60 tenants each mall was designed to hold, no mall was ever above about 3/4th full, all opening with vacant anchors. Despite the tenancy issues from the start, the Deauville Corp would continue chugging along, expanding the existing malls, and announcing plans for a new Kingwood Mall in 1985. Part of the expansions brought the electronic store Federated to Texas. While Houston had proved to be a volatile market for malls, Deauville felt confident with its discount strategy, even with a weaker-than-normal economy. However, when the 1986 oil bust hit, prices dipped to their lowest in years, and Deauville lost not only foot traffic at their mall but thousands of leases on their apartments. In near financial ruin, the Deauville Corp began to panic. Their malls had been dealt a tough hand, rife with competition and a sluggish economy, and with time would likely succeed. However, at the time, they were a money drain losing far more than they had ever generated, and with Kmart’s decision to shutter the Designer Depot stores that year, the malls would be on the hunt to fill anchor spots. In October of 1986, Deauville Corp handed over the deed for the Southwest Fashion Mall to InterFirst Bank. They would allow Deauville to continue running the mall for the time being, which by this point had taken on the City of Meadows Offices, and Police HQ. 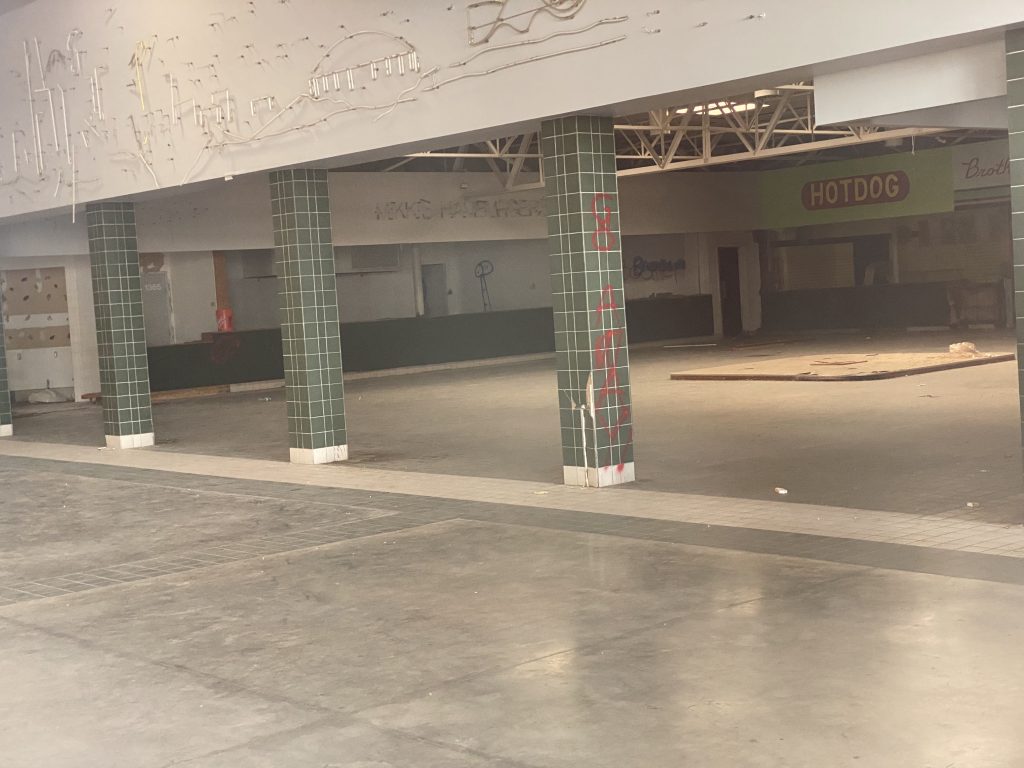 While Deauville or the bank refused to discuss it publically, the company was on the verge of Bankruptcy. The price of oil had not recovered, and the economy continued to spiral in Houston, triggering a demographic shift that would become the downfall of the once-prominent Deauville Corporation. Many of the apartment complexes the company had built over the past decades had gone from serving upper-middle-class office workers to short-term leasing, with many more sitting empty. In December 1986, Deauville’s remaining commercial properties went into foreclosure. This included the Spring and Webster Malls, along with the completed but unopened Kingwood Mall. Different creditors were allowed to take over various properties. At the time, the malls were all operating at or below 50% occupancy, with Spring holding the highest number of tenants. The mall operations would be split amongst various companies, taking Deauville completely out of the picture. The Stafford mall was almost immediately slated for a Power Center upgrade, which would not end up happening. Instead, Sam’s Club and Garden Ridge would take over large portions of the interior, with a small corridor of mall leading to the theater staying open until the building was fully vacated around 2000. The Webster Mall was the next location to close, doing so in early 1987 for planned redevelopment. This would involve turning it into a Power Center. The power center upgrades involved demolishing the theater and connecting corridors, leaving the mall in two chunks. These chunks were divided up into stores with exterior entrances. A new anchor was built in the former theater site but does not connect to any of the former mall space. The Kingwood Deauville Mall would never open. While exterior construction was completed and some interior work had begun, development was halted when the three existing malls quickly began to fail.

Later articles would cite that over time the quality of merchandise at the stores dropped dramatically. From real discount designer items to poorly made knock-offs. Which I believe is a result of the turnkey ownership model handing over the stores to inexperienced operators. The Kingwood mall would eventually be turned over to the Friendswood Development Corp., which would enter into serious leasing negotiations with Atari Inc. to convert the facility into a manufacturing plant. It seems that Atari desired that the area be made a tax-free import/export zone. Allowing them to import nearly finished items, do a small cosmetic touch like adding a logo sticker, and avoid paying any import tax as the item was technically “made in the USA.” It seems that the city of Kingwood was unwilling to budge on this item, as the mall was likely sold to them as a profit generator, much like it had been sold to Meadows. It seems possible that Atari may have intended to use this facility to import and rebadge RAM Chips, an illegal practice in which Atari was known to participate in at the time. Atari likely became aware of the malls after their purchase of Federated Electronics, which was recruited at the last minute to help fill out the malls. Eventually, the Kingwood Mall would be redeveloped as Office and Medical space and was eventually expanded into a Hospital.