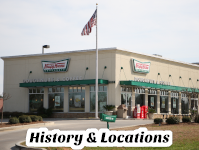 Krispy Kreme has old roots. Originally opened in 1937 Krispy Kreme didn’t focus on direct retail operations but rather supply. Their doughnuts were mainly sold in convenience stores, however customers could buy doughnuts directly from the bakery during business hours. The company began to expand their retail operations in the 1950s. They enjoyed regional success throughout the Southeast by the 1960s. In the 1970s the chain was purchased by a food processing company, and then later purchased back by a group of franchisees.

The company continued to grow but only in the Southeastern United States. The next major jump for Krispy Kreme came during the 1990s. The chain began to break the bounds of the South East and headed North and West. The stores were all located within the U.S. including many in Texas during the late 90’s. In 2001 Krispy Kreme opened its first international store in Ontario, Canada. International operations bloomed and expanded to 23 countries on six continents.

During the 1990s expansion Krispy Kreme spotted Houston as a possible area of growth. A growth plan was established and a suitable franchisee found. The initial plan was to open nine locations with the first opening in 1998, and to have the rest follow. Once the first nine locations opened the next stores would be approved, and new franchisees would be sought. The first nine locations were franchised by Lone Star Doughnuts Ltd. A local company that was created solely for the purpose of franchising locations from Krispy Kreme. The first Krispy Kreme location opened to much fanfare as the doughnuts were relatively well known.

This helped the chain to do fairly well in the beginning expanding to three locations in just two years, however growth began to stagnate. By 2006 only three new stores had been opened with two in the Houston area and one in Beaumont. Krispy Kreme was unhappy with the slow growth of the chain. This caused a lawsuit to be filed by Lone Star Doughnuts against Krispy Kreme in May of 2005. The lawsuit alleged that Krispy Kreme was pressuring Lone Star to expand too quickly and that they were being overcharged for supplies and being forced to buy unnecessary equipment, while Krispy Kreme claimed that Lone Star had not paid royalties, or for their supplies and equipment.

The lawsuit reached and injunction that required Krispy Kreme to continue to supply Lone Star normally as opposed to the cash before delivery practices they had assumed. The lawsuit was then sent to arbitration.  This ended with Lone Star Doughnuts ending their association with Krispy Kreme in February of 2006.  Lone Star was allowed to continue to operate under the Krispy Kreme name until a brand could be built. All stores were rebranded as Jumble’s Dough Factory in March of 2006. The doughnut supplies to local grocery stores such as Kroger, Rice and Gerlands were reinstated under the Jumble’s banner. The stores also began to offer specialty coffees hoping to capitalize on the success of Starbucks. Initially Jumble’s doughnuts resembled Krispy Kremes but the quality of the ingredients began to drop and so did the doughnuts. The stores were described as being ghost towns fully stocked but with almost no one in them. In June Jumble’s immediately shutdown operations. It was quite sudden with phones disconnected changed locks at the Richmond Ave location and a lack of deliveries to their last remaining grocery client Kroger.

In 2014 Krispy Kreme made a return to the Houston area. As of May 2018 the new franchisee has 5 locations across the Houston area, and at least 2 locations are in the processing of being built but have slow progress. Overall though the outlook seems positive.