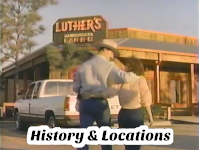 Luther’s Bar-B-Q was a Houston staple for over 30 years. The restaurant was founded as the third venture of an entrepreneur who simply went by “Chandler” (His family name). A stockbroker by trade, Chandler’s first venture into food service was The Great Mining Company a Colorado/Gold Mining themed steakhouse. Which itself was a take off on the popular Aspen Mining Company in San Diego. The unofficial Houston counterpart was located at 2626 Tanglewilde. Positioned in the rear of the Woodlake Square Shopping Center, the new restaurant was in quite a hip area, and had a price tag to reflect this. The dining room included authentic rocks hoisted by crane prior to construction, huge support timbers, antiques, and mining equipment, all delivered from Colorado. The exterior of the building made it look almost like you were entering a mountain. The landscaping was filled in using mature East Texas pine trees. The detailed thought Chandler put into planning The Great Mining Company helped it to become a great success.

Riding high on this success in 1975 Chandler decided to expand his restaurant ventures with a new bar named “The Park” located on Richmond at Fountain View. The Park sported a 1920’s theme and included an antique bar flown in from California along with multiple authentic Tiffany lamps. While still high brow, the bar was not as exclusive as Chandler’s previous restaurant. To compliment the bar, Chandler envisioned a simple restaurant directly across from the bar. This restaurant would specialize in hamburgers, BBQ, and beer. This simple start would give birth to Luther’s.

The first Luther’s was designed to resemble an old General Store with a wide front porch, and polished wood floors. Inside the restaurant Luther’s used a cafeteria line setup to serve BBQ, and a separate counter to order hamburgers from. Both lines ended with beer and a cash register. The exterior landscape was left open giving a courtyard feel between The Park and Luther’s. Similarly to his previous restaurant Chandler planted mature Texas pine trees to help accent his location. All of these features would be present in the later franchised locations of Luther’s.

As Chandler developed his knowledge of running a restaurant, he wanted to expand to a new concept. He was supposed to have said he wanted to take Bar-B-Q and apply the Ray Kroc formula to it. At the time most BBQ restaurants in town were smaller family owned places. It wasn’t really seen as a chain affair, and that was something he decided he wanted to change. One of the first changes for the new chain Luther’s locations would be that they were given Drive-Thru’s. While drive-thru BBQ was not a brand new it was quite the novelty.

The expansion of Luther’s would mostly take place after Chandler’s departure from the company, leaving to help develop failed Chili’s competitor Spoon’s. New owner, Chart House would take them beyond Houston. Opening multiple locations in Dallas, Louisiana, and Colorado. An expansion into Phoenix was planned with Chandler acting as franchisee, but as far as I can tell it never happened. A single location was also constructed, and almost opened in Charleston, South Carolina. Although this was stopped due to the 1985 purchase of parent company Chart House by Pillsbury. Throughout the years Luther’s would continue to be passed through different sets of ownership.

While business hadn’t slowed in their home market of Houston, external forces caused the locations outside of the Houston close. First in the 1990s the Dallas locations became Colter’s BBQ, a clever re-imagining of the name to reuse as many letters as possible. The Colorado locations were removed from the website in 2003, leaving Louisiana and the original Houston market. Hurricane Katrina would destroy all of remaining out of state locations, forcing Luther’s to accept a purchase offer from competitor Pappa’s BBQ in 2005. The Luther’s name would last through most of 2006, with the final stores transitioning to Pappa’s by 2007. A sad and slow end to what had once been a bright and vibrant star, this still leaves one question. Who the hell was Luther?!