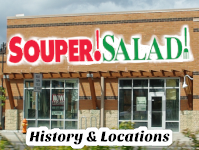 Souper Salad was established in Houston in 1978. At the time Souper Salad was seen by most as an oddity. The reason being that stand-alone salad bars were not common, and salad as a stand-alone restaurant meal was even rarer. Generally you’d find Salad Bars in a place like Steak and Ale, where it was considered a treat in addition to your meal, as opposed to another full course. Despite all this, the “temporary trend” of healthy eating had a growing following especially with college age customers. Making it no surprise that the first Souper Salad location would open right outside the H.B.U. grounds. The second location was also on the Southwest side of town at Weslayan and Bissonnet. Just West of Rice University. The first two locations Souper Salad were also praised for their huge variety, having over 50 separate items on their salad bar. Within Houston As a chain Souper Salad would experience their greatest success during the late 90s and early 2000s growing to over 150 locations across the Southwestern

U.S. With over 15 locations in the Houston area alone. The chain had a reputation as a healthy family friendly option. Featuring an all-you-can-eat salad bar, and hot items like DIY tacos and baked potatoes. As health food standards have changed the available fare at Souper Salad became less desirable, eventually forcing most locations to close. There are no longer any Souper Salad locations in Houston proper. The nearest two are in Humble and Pasadena.