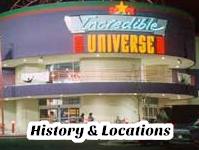 Incredible Universe was a chain of stores operated by the Tandy Corporation. Already well known in the United States, The Tandy Corporation was an electronics company based out of Fort Worth, Texas. They began to sell pre-assembled microcomputers to home consumers, and became a huge name in the electronics industry. The company would eventually purchase a mail order company called Radio Shack which they would expand as a distribution network including retail locations. During the 1980’s electronics superstores began to take off through the success of companies like Best Buy, Circuit City, and Fry’s. Tandy was having great success through their Radio Shack stores but wanted to expand into the superstore market. The decision was made to open a chain called Incredible Universe. The stores were huge in comparison to other super stores averaging around 185,000 square feet. The stores almost resembled IKEA locations. They had McDonalds, day care facilities for shoppers with children, and  huge showrooms for displaying and demonstrating products.  Two test locations were opened. One in Arlington, Texas the other in Wilsonville, Oregon. These two test stores were very profitable and helped Tandy make the decision to expand the chain. Eventually reaching a total of 17 total locations.

The Houston location opened September 30, 1995 to much fanfare,  including a firework display. The Houston store fared relatively well but was not one of the top performers in the chain. They managed to do pretty good business on weekends but failed to attract customers during weekdays. The store suffered cutbacks along with the rest chain in May of 1996 when two locations were closed and 320 jobs were cut from the remaining stores. The chain continued to falter and the Houston location finally announced their intent to close on January 6, 1997 along with the rest of the locations. At the time of closure the six top preforming stores were sold directly to Fry’s Electronics with the rest of the properties being sold to developers after a going out of business sale was completed by February 1998. The Houston property sat vacant with plans to turn it into a mixed use retail entertainment center including a movie theater falling flat. Other tenants were considered such as a call center who wanted to turn the building into office space. In 1998 Houston Community College reached a deal with the property owner to purchase the space with the intent of replacing the leased Galleria Campus in the now demolished 1200 Post Oak Office Tower. Upon purchasing the space HCCS gutted the complex, and removed the loading docks. They then built inside the shell adding a full second story and raising the usable square footage to around 300,000 sq ft. The outside of the building has received a bit of a face lift including an architectural addition to the rotunda, although it still pretty much resembles the Incredible Universe portion of its life with the original sign being used by HCCS up until 2014.