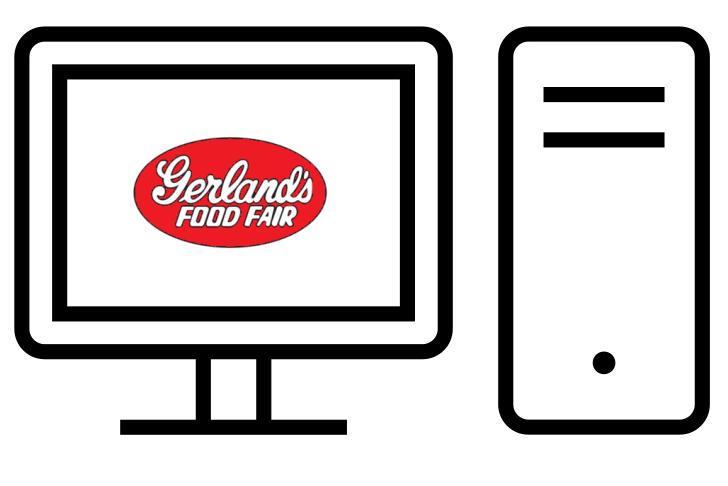 Houston was an interesting place in around 1989 and 1990. The economy, both locally and nationally, was a bit sluggish at the time. Locally, the area was still recovering from the problems facing the oil and gas industry throughout most of the 1980s. Given these problems, one might expect the local supermarket scene to be rather troubled as well, but that was not at all the case. Perhaps the most famous Houston supermarket story of 1989 was Boris Yeltsin’s famous visit to a Clear Lake-area Randall’s which caused a profound impact on Yeltsin and has been credited with ending the Cold War!

The supermarket which featured online shopping in 1989 might be a bit of a surprise to most readers. One might expect it to be Randall’s, Rice Epicurean, or maybe even the then-new in-town Auchan Hypermarket, but the online shopping service was actually offered by Gerland’s Food Fair! For those who shopped at Gerland’s Food Fair, they may have seemed like a fairly traditional supermarket who operated in a rather measured manner. In many ways, this was true, but Gerland’s was also on the cutting-edge in the late 1980s and early 1990s. Some readers may even remember that Gerland’s was one of the first local retailers to use discount cards with their Customer Advantage card.

Of course, one might wonder how someone even shopped online in 1989. As someone who was a computer and modem user in 1989, I can tell you that the Internet was not something people used at home at that time and the World Wide Web as we know it was still a few years away from being invented. However, online dial-up subscription services such as America Online and CompuServe did exist which allowed people to read articles, post on bulletin boards, and even shop online. One of the most popular online services at the time was Prodigy. Prodigy was a joint venture between IBM and Sears. Here’s a short video showing various services offered by Prodigy. Prodigy was heavily promoted at Sears stores at the time. While Sears has a reputation for not keeping up with the technology, that reputation does not really reflect reality as Sears was at the forefront of electronic shopping with Prodigy and even their earlier attempts at electronic shopping such as LaserDisc video catalogs.

Gerland’s made their online store available to Prodigy’s subscribers in the Houston area. In fact, Prodigy had been teaming up with grocers in various cities around 1988-89 to offer online grocery shopping. This even included Kroger in the Atlanta market. When Gerland’s program first launched in 1989, only five of Gerland’s 27 stores were involved in the online program, but Gerland’s expanded the program to about three-fourths of Houston by late 1990. Gerland’s online store in those days was remarkably similar to modern online shopping options. Gerland’s offered almost 6,000 items which could be purchased online and that included fresh produce, meat, and pharmacy orders. The online prices were the same as what were offered in the stores. One unique aspect of online shopping in 1989 is that orders had to be paid for using a credit card. During that time, most supermarkets did not accept credit cards for grocery shopping and so this online venture was one of the first examples of customers paying for their groceries via a credit card.

Like in modern times, orders could be delivered to the customer’s homes/offices or items could be picked up at a Gerland’s store. Initially, there was a fee of $7.50 for delivered orders and $3.75 for in-store pick-up orders. By 1991, it seems there was no additional fee for deliveries.

One reason why I do not shop for groceries online here in modern times is that I am worried that I will not get fresh produce and such if I let the store pick items for me. However, Gerland’s understood this worry even back in 1989 and had produce and meat managers personally pick items for online customers. If a customer was not satisfied with what they received, they could ask the store to re-fill the order.

Interestingly, one reason that some grocers are still nervous about online grocery shopping is that customers who shop online are less likely to make impulse purchases caused by flashy displays and the aroma of certain items. Well, this must have been an issue in 1989 as well because one customer even claimed that they came out ahead financially shopping at Gerland’s online even with the $7.50 delivery fee because their husband was an impulse buyer when he shopped in the stores!

Gerland’s was not the only Houston grocer who gave customers a shop-at-home option. AppleTree, which was the ill-fated continuation of Safeway in the Houston area after Safeway left Texas, promoted a shop-by-phone call option. Rice Epicurean meanwhile had a shop-by-fax option. While modern at the time, these methods don’t seem nearly as modern by current standards as what Gerland’s was offering.

It’s not clear to me when Gerland’s discontinued their online shopping option. Given that much of computing in the late 1980s/early 1990s consisted of textual command line interfaces instead of graphical mouse interfaces, it’s not surprising to read that some reviewers found shopping for groceries via Prodigy to be rather challenging. By the mid-1990s, computing became more graphical and America Online had become the dominant online service over services such as Prodigy. Even then, the Internet was growing so quickly that it seemed obvious that even America Online would be rendered obsolete sooner rather than later. Randall’s started offering online shopping via Peapod in 1997. Randall’s heavily promoted this in 1997 and, of course, many families were starting to use personal computers at that time. Still, it was hardly common for people to shop for groceries online at that time.

For those interested in reading more about Gerland’s Food Fair, keep reading Houston Historic Retail as Mike from HHR does plan on having a post about Gerland’s in the near future.

Online grocery shopping was just one of the cutting-edge methods employed by Houston grocers in around 1989-1990. The Houston Chronicle ran a lengthy piece on January 10, 1990 (Page 1, Page 2, Page 3) discussing all the unique services offered by several of Houston’s grocers at the time. The store which was really capturing Houston’s imagination at the time was the Fiesta Mart that opened in Webster that was 213,000 sq. ft. in size and featured a hydroponic garden! The Chronicle referred to it as the “AstroWorld of grocery stores” and that was certainly accurate. That store, along with the cutting-edge offerings by Randall’s, Rice Epicurean, and Gerland’s, really showed how strong Houston’s independent grocers were during that period before the likes of Wal-Mart and H-E-B entered Houston and made Houston a center of grocery cost-cutting rather than a center of customer-focused innovation.

Some of the more interesting innovations discussed in the article were unsurprisingly at Randall’s. The article discusses Randall’s New Generation stores which implemented a “show-biz” approach to grocery retailing by having open-concept service departments where customers could watch the employees in action cooking at the deli, baking in the bakery, and so forth. Some of this has been copied by retailers in modern times such as H-E-B. Those wanting to see a Randall’s New Generation store in action can watch this video on YouTube which shows off all the special features of a Randall’s New Generation store. Another interesting concept Randall’s had at the time at all their stores was what they called “home cooking.” This is to say that if you gave Randall’s a recipe, they would cook a meal for you using your own recipe!

We have not mentioned Kroger yet, but they probably deserve a mention as they, along with Randall’s, were the largest grocers in the Houston area in 1989-1990. Kroger’s location in at 3665 Highway 6 in Sugar Land, which has since closed, was mentioned in the Houston Chronicle article. The Chronicle describes the store as using the “power alley concept.” I can’t say for sure what “power alley” means exactly, but after discussing things with  Retail Retell of The Mid-South Retail Blog, whom I consider to be a bit of an expert on all things Kroger, we have a pretty good sense for what the “power alley concept” described.

In all likelihood, the “power alley concept” was probably a store design that combined Kroger’s then-new Neon décor package, which would have been quite flashy at the time, with a store layout that was quite different from the typical Kroger Greenhouse stores with the Bauhaus décor. Unlike most of the Greenhouse stores, the “power alley concept” stores were probably like most of the 1990s Kroger Signature stores in that the service departments such as the bakery and deli were right at the store entrance. The bakery was on a floating island in front of the produce department whereas the deli and other service departments were along the wall in between the entrance and the produce department. For more information about Kroger’s Neon décor, Retail Retell’s excellent guide to Kroger’s Neon décor at the Mid-South Retail Blog is a great resource.

Does anyone have any memories of innovative things tried by various Houston grocers over the years? If so, please be sure to share your memories, or any other thoughts about the subject, in the comments section below!