The Astrodome served as the first home for Houston’s one and only MLB team from 1965 to 1999. As far as baseball stadiums went, it was incredible at the time. The Astrodome was fully enclosed, air conditioned, and provided a ton of food options for hungry stadium goers. At the time of construction, the Astrodome helped set the standards for modern baseball stadiums.

In 2000 The Astros made the decision to move from the Astrodome to the newly built Enron Field. Just as the Astrodome had nearly 50 years earlier, Enron Field was full of innovation, including a retractable roof, outdoor A/C, and increased retail opportunities. 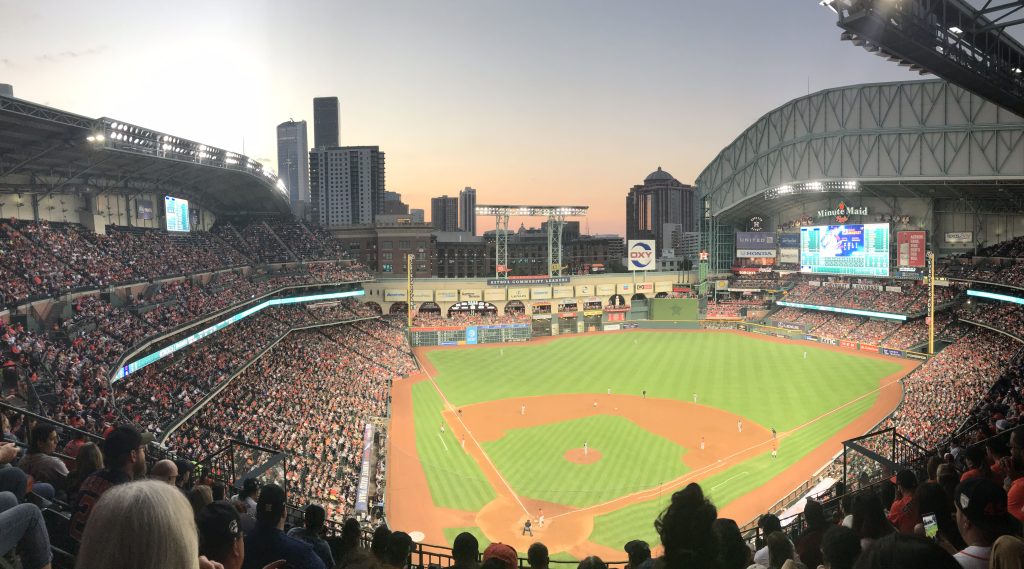 I recently had occasion to catch an Astros game. While I’ve been to Minute Maid Park a few times before, most of my memories the Astros are in the Astrodome. Making the trip up to our nosebleed seats provided many opportunities for surprise. As I learned that retail operations in baseball stadiums had changed from the simple Hot Dog, and Beer Stands I remembered as a child. 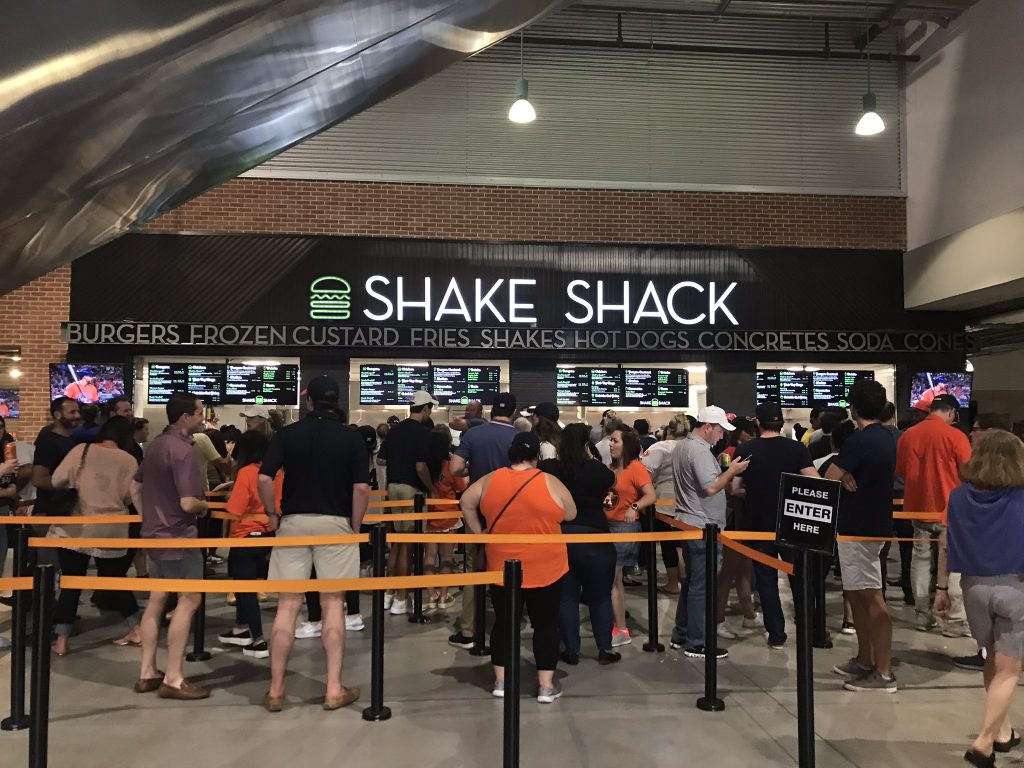 One of my first surprises was Shake Shack! A newcomer to the Houston area, the New York based chain has been beloved by many. Growing from a single Galleria location in 2016 to four by 2018. Constantly compared to In-N-Out Burger, who has yet begin any construction in Houston as of May 2019. The menu has most of the normal Shake Shack offerings, but is not complete. 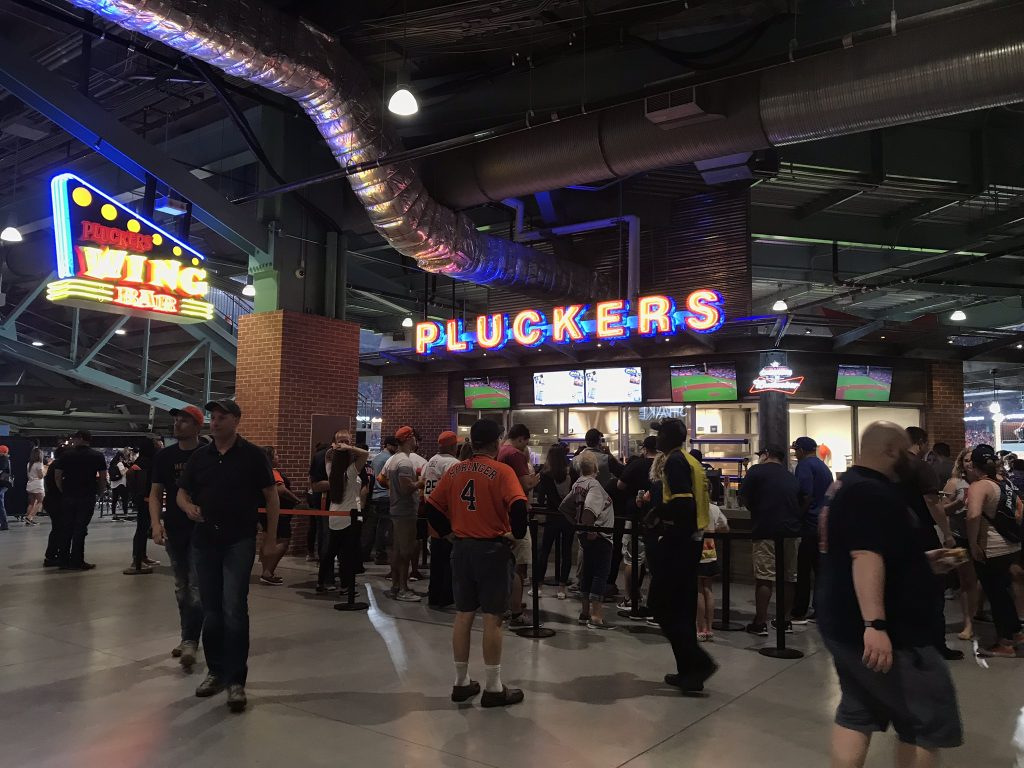 Directly across from Shake Shack was a Pluckers. An Austin transplant, both Pluckers and Shake Shack are extremely popular with younger crowds. While the overall attendance at Minute Maid is mixed in age, the customers in this area skewed to the younger demographics. Pluckers was extremely busy which made it difficult to see the menu. 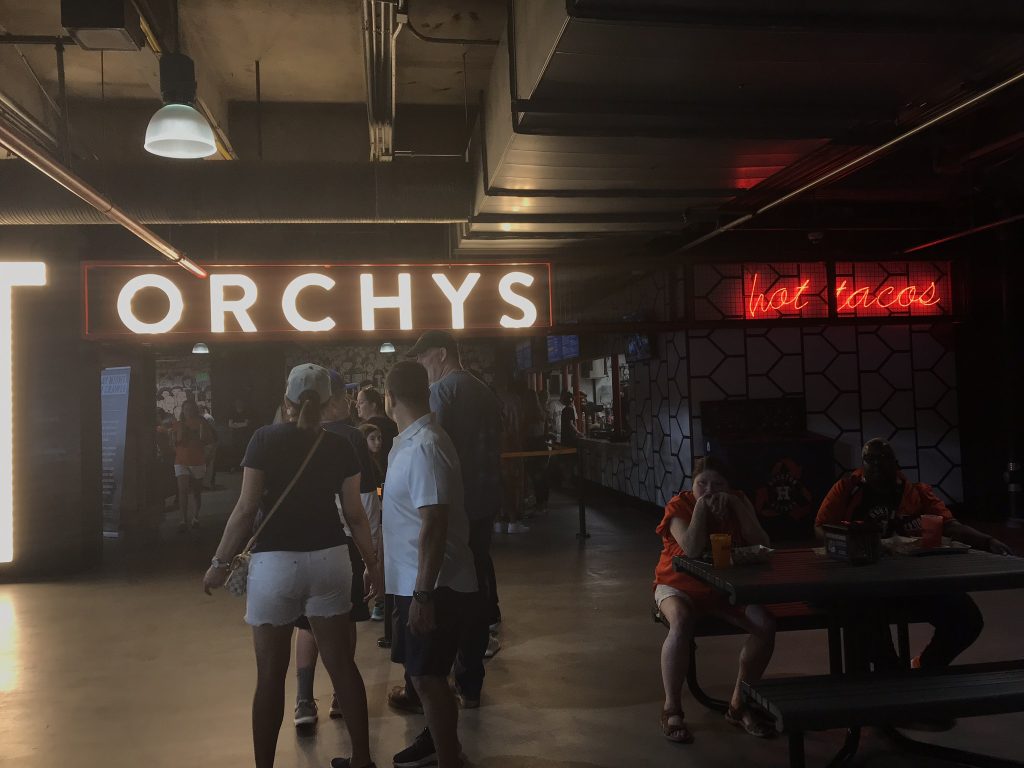 Located above Shake Shack and Pluckers was Torchys. While the sign might look incomplete the “T” on the left was so bright, that I couldn’t fully frame it in the photo. Located in a small corner the area is dark, this along with the bright signage help to match a typical Torchys. 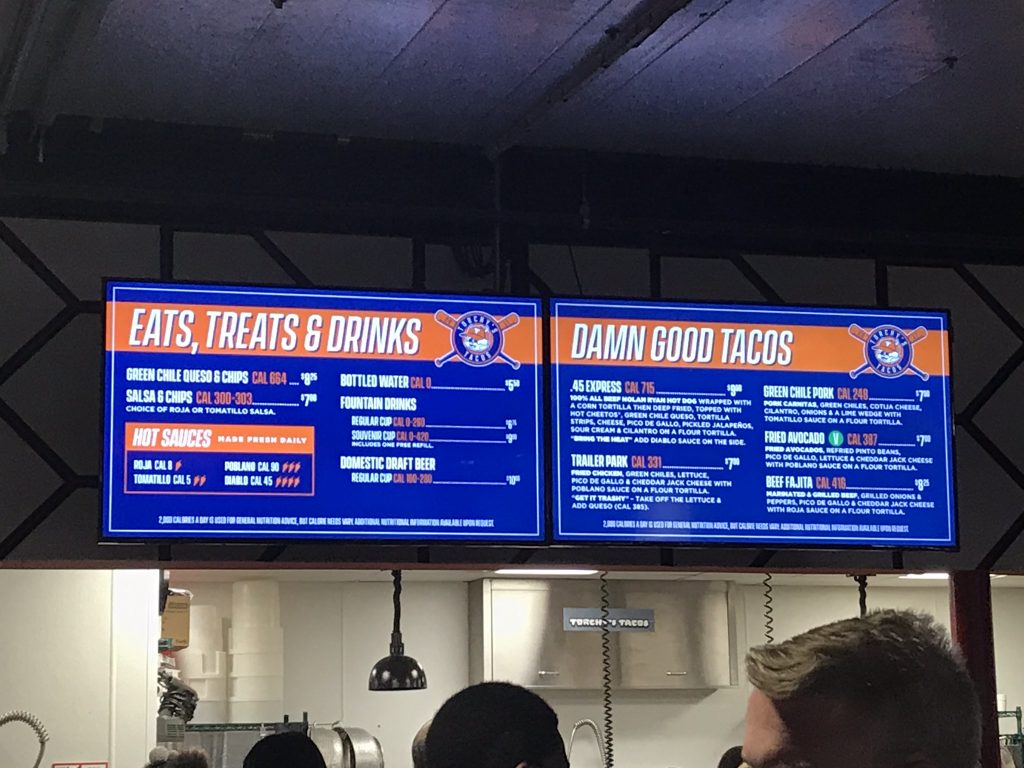 I was able to catch a picture of the menu at Torchy’s. Showing that the menu is somewhat limited compared to the selections at a normal location. Although since it is a Torchy’s one has to wonder if they have any secret menu items.

One of the things I wasn’t expecting was the numerous carts around the stadium. I mostly remembered carts as selling only alcohol for those who didn’t want to wait in a food line. This is no longer the case, and in addition to selling alcohol many carts now sold food that was exclusive to the carts. 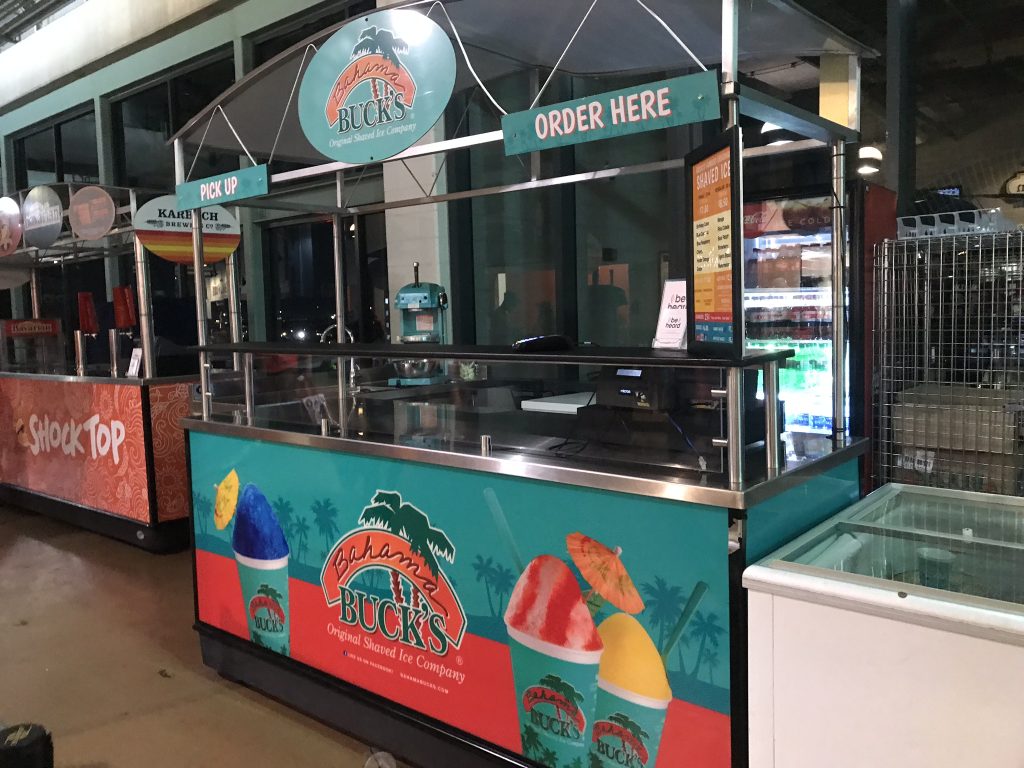 A great example is, Bahama Buck’s a familiar sight to anyone from Lubbock has been expanding their presence in the Houston area over the past five years. They had multiple stands around Minute Maid. All of which shaved their own ice. While the selection of flavors is limited compared to a normal Bahama Bucks, they have more than you’d expect!

This house brand sold fries, and for those like me who can only afford nosebleed seats, it’s one of your only options for fries on the top level. The name did remind me of Red Cow Entertainment’s BoxMac. 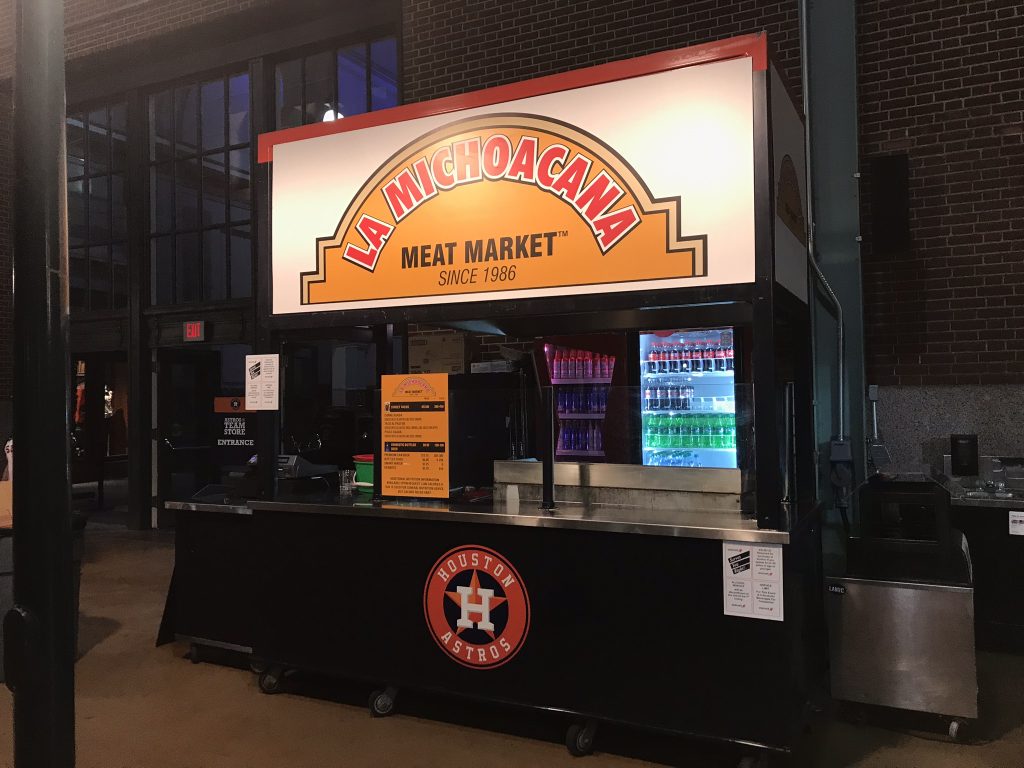 This was a big surprise to me. The La Michoacana Meat Market chain of stores, began in Houston. While they’re relatively well know for as a grocery store, I was unaware that they sold ready made food. This stand was located on the Concourse of the former Union Station.

Now with all the options available to a retail connoisseur such as myself, you might be surprised to learn that what I really wanted to eat was just a normal hot dog and some popcorn. Part of this is due to the enormous up charge all of these chain establishments take on when entering any kind of closed venue. Part of this was also nostalgia for Dome Dogs, which are not served at Minute Maid. 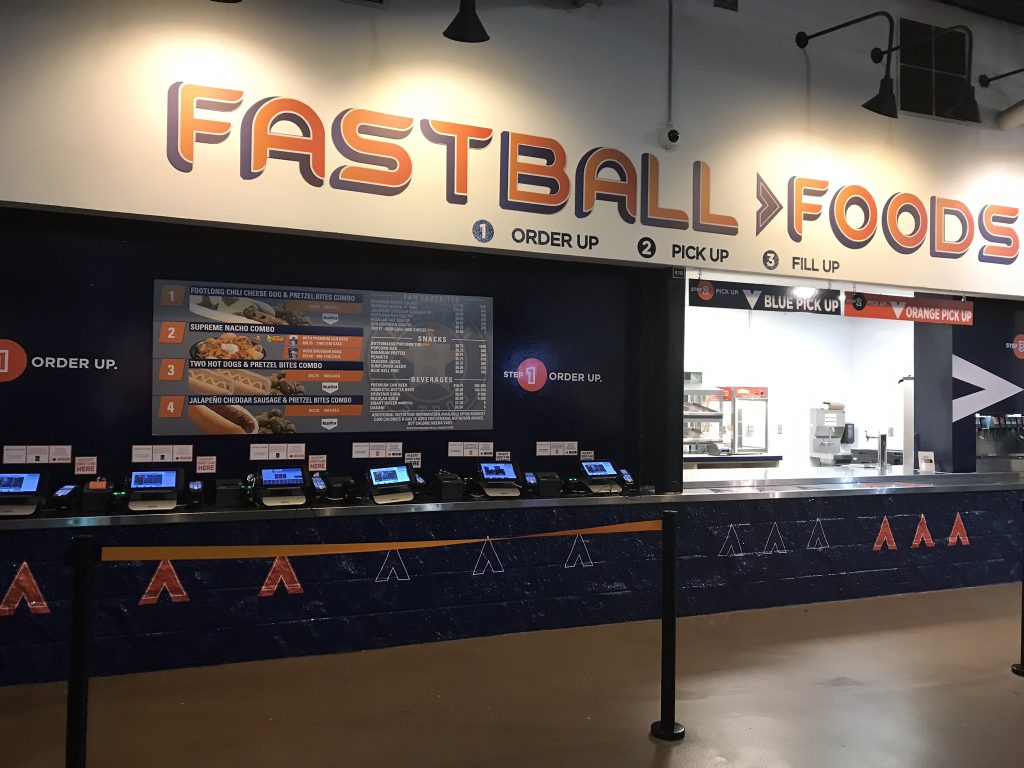 While some standard concession stands exist in the park, many have been updated. With half of the stalls being replaced by Order Kiosks and the other half a pickup stand. As far as I could tell there was little to no consistency between locations. Some of the hot dogs were Nolan Ryan Beef, some weren’t. It was just luck of the draw wherever you ended up. 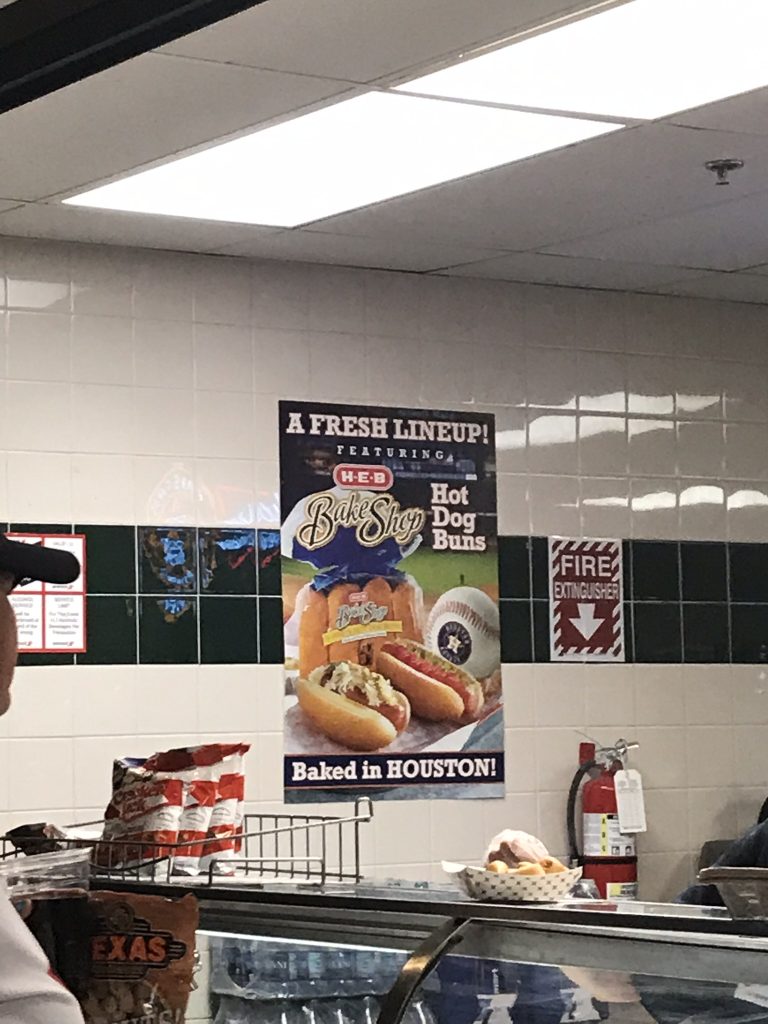 One of the stands even used H-E-B Bake Shop Hot Dog Buns. I wasn’t expecting this and chose to buy my hot dog from this stand. Figuring that a store brand bun would be slightly better than whatever the default offering was. Unfortunately, my hot dog did not stand up to a Dome Dog. It could have been rose tinted glasses ruining my hot dog, but I’m guessing the quality just wasn’t that great.

Overall this proved to be a fun time, even though the ‘Stros lost, and the hot dog sucked. Going to a baseball game is fun because of the people you’re around. Not the food you eat! If you’ve liked my Facebook Page you had some idea that this post was coming. If you haven’t liked it, consider doing so. My Facebook page gets some extra content.