The history of West Oaks Mall begins with Foley’s. In search of a new location for their department store, Foley’s commissioned a search of the rapidly growing West side of Houston. The location would find a home for the new store at the intersection of Highway 6 and F.M. 1093. At the time the area was not much more than fields, farm houses, and the looming Barker Dam. However, real estate development was taking place on a large scale around the area both North and South along Highway 6. On July 20th, 1982 the Alabama-Coushatta Medicine Men helped Foley’s open their tenth store in the Houston area. The store grand opening was a process similar to other Houston malls such as Northwest and Alemda Malls where Foley’s locations, also predated the mall. 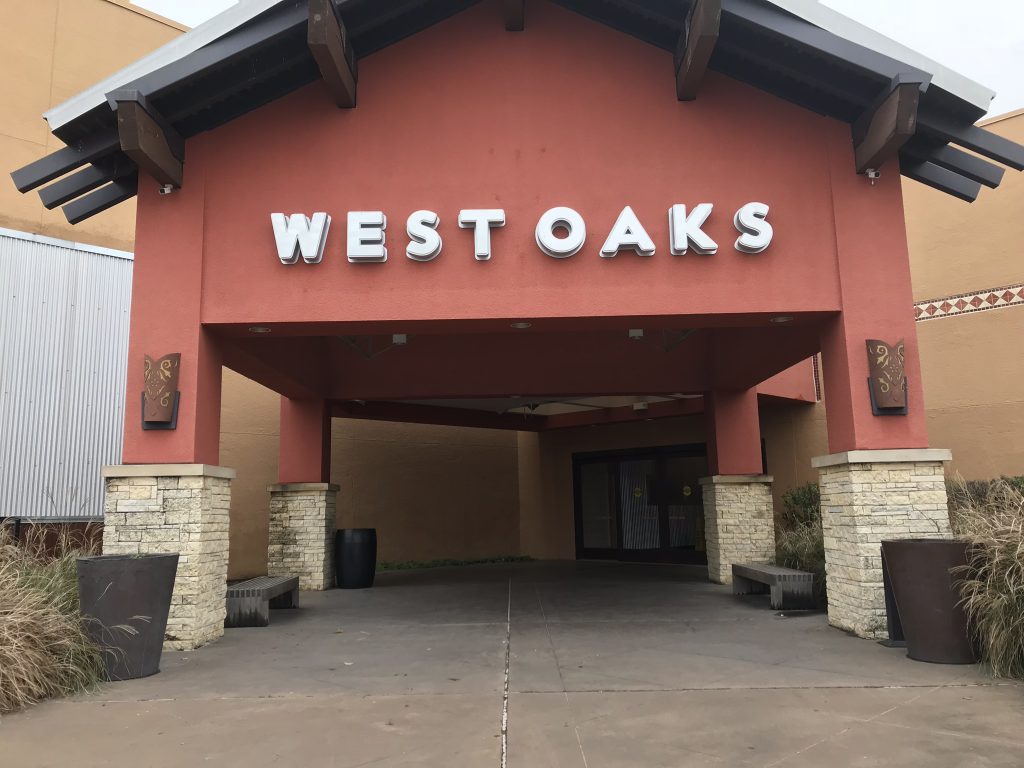 Approximately two years after Foley’s opened their West Oaks location, the rest of the mall took part in a grand opening celebration. The mall was built in three wings. One led from Mervyn’s (the West anchor) to the Fiesta Court, a two-story food court. The second wing led from Foley’s (the East anchor) to the Park Court which served as a smaller secondary food court. The third wing dubbed “The Arcade” ran North to South between Lord and Taylor (the Northern anchor) and an empty anchor pad, which was being used as an entrance. The Arcade also connected the Fiesta Court and Park Courts via two short hallways.

The malls design was decidedly Spanish. With Terracotta tiles being used for flooring, darker Earth tones used for paint, lots of accent wood, all contrasted by bright white stucco. The mall also featured plaza style fountains imported from Mexico. The food court even contained a “second story” which functioned as a raised plaza for smokers. (Most reports have stated this was more like a suspended platform, which was hung from the roof rather than a true second story.) 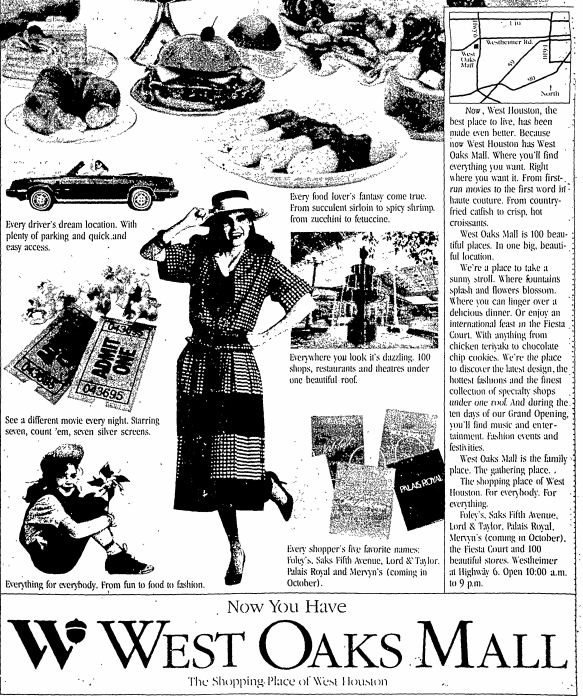 By the mid 1980s the west side of Houston was the place to be. With what had been farmland only a few years ago now becoming the newest portions of Houston. The housing developments around the West Oaks area were built up to be quite high class. Initially it lived up to this, with many lots being sold to employees of nearby petrochemical companies. This demand for modern higher class neighborhoods was noted by amenities like community tennis courts, pools, and parks. When the late 1980s oil bust occurred some people defaulted on their homes, there was also an excess of built but unsold homes, leading to a quick drop in price point. The area which had been decidedly upper middle class in the early 80s, was mostly lower middle class by the late 80s.

By the early 1990s the traffic to the mall had become mostly lower-middle class. Some upper-middle class shoppers from distant suburbs in the Richmond and Katy areas would indeed make the trip to the mall for stores like Foley’s. However, the majority of the traffic came from the immediate area surrounding West Oaks. This shift in demographics would cause the closure of both Lord & Taylor and Saks Fifth Avenue in 1990. While the traffic had changed, the flow was steady. Both stores were quickly replaced. With Sears taking the Saks spot and JC Penney moving into the Lord & Taylor. The empty anchor pad would also be developed with Dillard’s building a brand-new store that was not directly attached to the mall. It is connected with a small hallway due to the reuse of the original mall entrance.

During the early 1990s West Oaks saw a period of stability. They were able to drive new traffic from the ever expanding Katy and Fort Bend County areas. However, First Colony mall would take most traffic from Fort Bend County away from West Oaks. Although, some shoppers would continue to visit West Oaks when looking for cheaper merchandise. As development continued to push further West, expanding families began looking to leave the West Oaks area and head further West. This led to a secondary decline in property values resulting