Welcome to Retail News: This week we learn about a big tenant loss for Almeda Mall, a new Ollie’s Bargain Outlet pops up in a familiar location!

The Burlington (Coat Factory) at Almeda Mall has operated at Almeda Mall for just shy of 15 years at this point. The store opened in 2009 replacing JC Penney after they chose to relocate in 2006. While ambitions seemed to be for the space to end up subdivided between multiple tenants, only Burlington ever occupied the space. Their operations took up approximately half of the building with an odd setup featuring a hallway to lead customers to the old Penney’s restrooms You can see that the other quarter of the store sits in a semi-finished state, with an exterior entrance even fully available unused. With the store sitting underutilized, it’s not much of a surprise that Burlington would make plans to move out in search of a better-suited space. This new store is a small portion of a larger building as part of a recent trend in downsizing for Burlington. Located at 11546 Gulf Freeway Houston, TX 77034 this entire building was originally a Woolco store. After closing in 1983 the far left portion of the building was subdivided serving as many different outlets. Including Front Row Department Store, Bizmart, and Office Max. However, more recently the space has mostly been vacant hosting a few transient tenants in the last year or so. While Burlington has yet to officially announce the move, they have filed permits for a build-out of this new location, which is directly across the street from Almeda Mall. It seems unlikely the two stores will remain open concurrently. 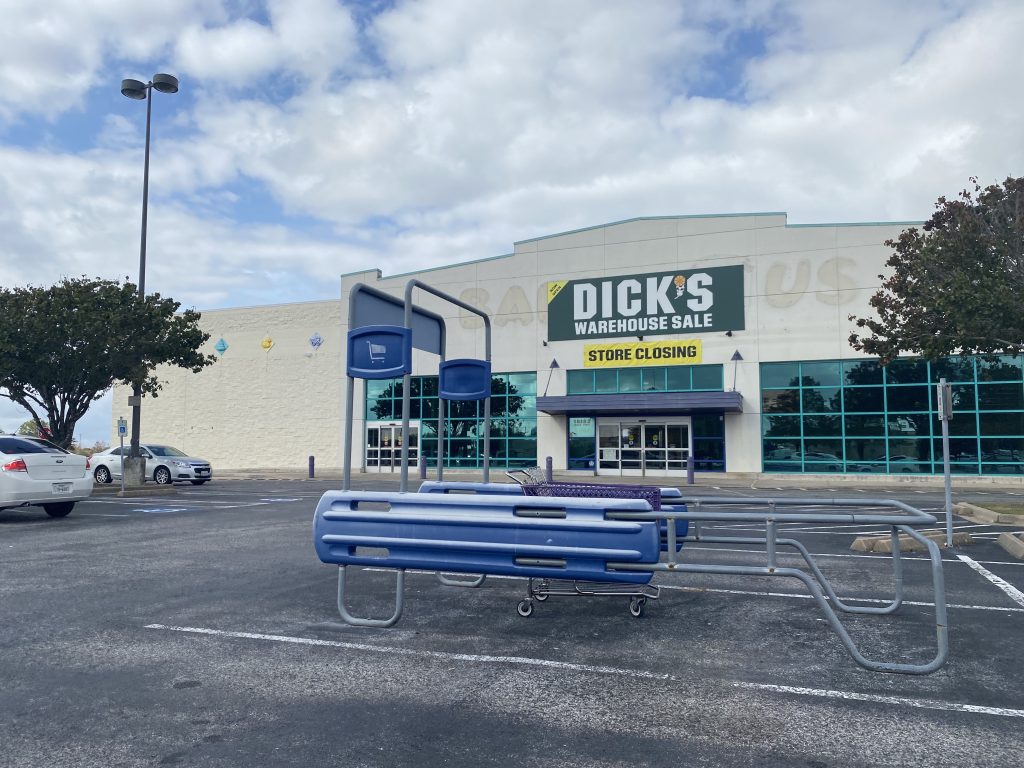 The newest Ollie’s Bargain Outlet in the Houston area is being planned at 18182 Gulf Fwy, Friendswood, TX 77546 in a former Babie’s ‘R Us. The space which closed in 2018 as part of the TRU Bankruptcy, sat vacant until early 2021 when Houston’s first Dick’s Warehouse location opened. According to inside sources, the location was quite successful and represented the entire stock of the Dick’s Houston area clearance sections in one location. The management wished for the store to remain open, but the landlords had a reported “dispute” that HHR’s source was not privy to. However, it now seems that the cause of the dispute was likely the desire of Ollie’s Bargain Outlet to acquire the location. During the early stages of Toys ‘R Us store closings, Ollie’s hinted at committing to a large number of locations across the country, and it could be that their desire to eventually occupy this space is what kept potential tenants out, and also explains the very temporary nature of Dick’s Warehouse store. Ollie’s plans show little modification to the building except to shrink down some warehouse and backroom space in exchange for adding a bit of “warehouse sales floor” for rugs and such. Ollie’s has yet to make a public announcement about their new store, however, work should soon begin within the next couple of months.

Leave a Reply to Anonymous in Houston Cancel reply