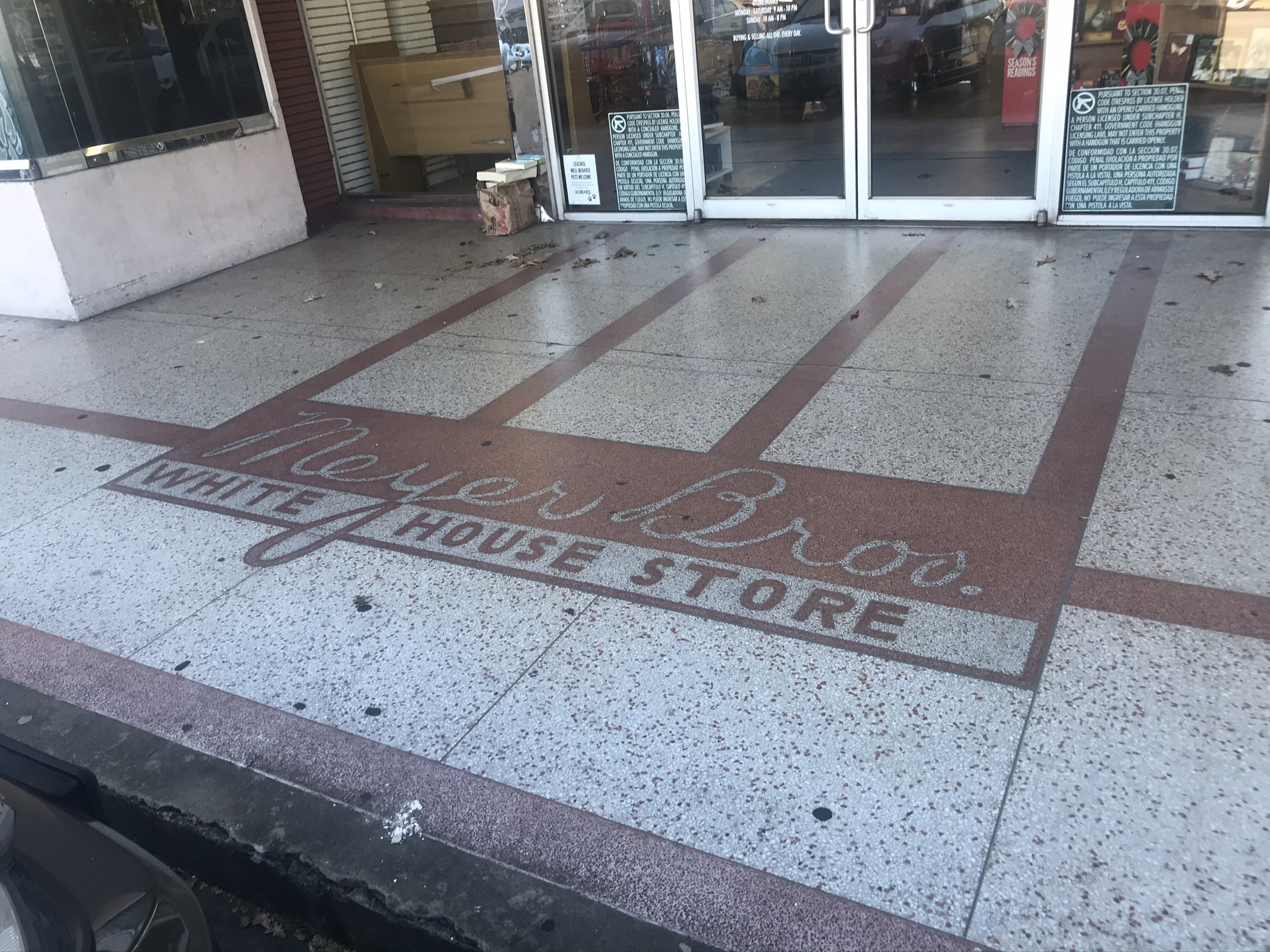 In July of 1981 Half Price Books opened in a prominent spot on University Boulevard. The first store to be built at the corner of University and Kirby was White House, which opened in June of 1941. A local department store chain, they were known for building smaller sized locations throughout the Houston suburbs. It would be purchased by the Meyer family, a group of family members who had been employed in various positions with Foley’s until they sold out to Federated in 1947. At this point they would switch the name to Meyer Bros. White House. In 1950, Only nine years after opening the original White House location, Meyer Bros rebuilt the University store. This was done to create an anchor location for the new announced “Village Shopping Center”. The grand opening included two free Braniff all-inclusive trips to Cuba!

Throughout the 1950s and 60s Meyer Bros. continued to operate out of this location. The company would eventually sell out during the late 50s to another department store chain which would quickly fold. The store space was rented out during the late 60s and early 70s to a few short lived clothing stores. In the early 70s, the space was divided. With the right side (Jos. A Bank) becoming a Vespa Dealership for many years, and the left side was first an exercise equipment shop, then an asian grocery store.

During the 1970s Rice Village experienced a decline, with the popularization of indoor malls, and suburban bound movement. The worst of this was during the late 70s. Many people focused on the idea that Rice Village was full of adult shops, seedy bars, and bad clubs. At one point, the Jos. A Bank portion of the building was used as a club. The reality of this was actually that Rice Village had become a mix of bars, some adult stores, and multiple ethnic food shops. Regardless traffic dropped, and so did the quality of tenants.

When Half Price Books announced their intent to move into what had most recently been a Thai grocery store, some updates needed to be made to the building. It was basically the leftover 2nd story portion of the original Meyer Bros store, and whatever little space existed under it. As such HPB also acquired a small piece of the building next door.  A book store was considered a higher end tennant for Rice Village at the time, even if it was used books. This would begin a chain of gentrification that gives us the Rice Village of today.

In the end, according to Half Price Books what finally drew them out was the hike in rent. It’s somewhat ironic to consider that the fact that Half Price’s own existence is what led to its eventual downfall. In a city like Houston it’s not hard to imagine Rice Village falling apart, and being torn down for condos, or other cheap housing. However this building has managed to stick around into 2020, let’s hope it remains a bit longer. 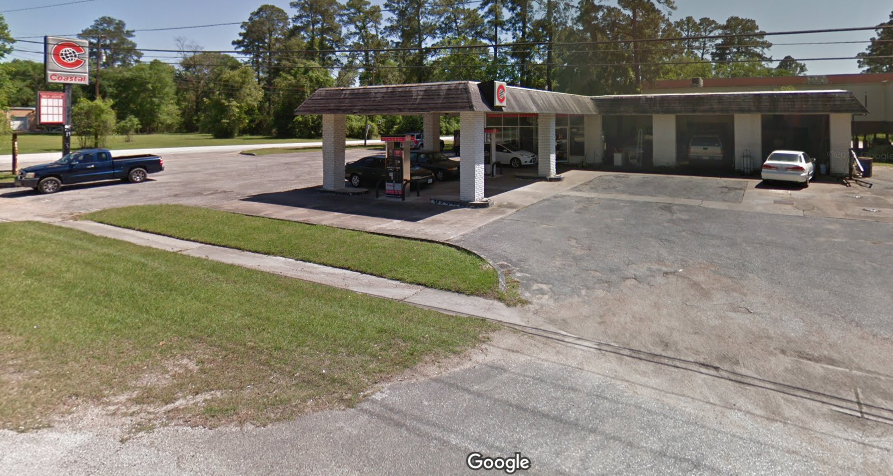 As with many of my current readers, I still have a huge, Swamplot shaped hole in my heart. The rise in my frequency of posting is largely due in part to a few readers contacting me and mentioning that this site helped somewhat to fill the void. In my research I sometimes check demolition reports. I have been wanting to share the demolition reports I’ve seen. However, I wanted to make some distinctions from Swamplot’s Daily Demolition Report. I’m only featuring commercial properties which have: some connection to retail, are interesting, or are historic. 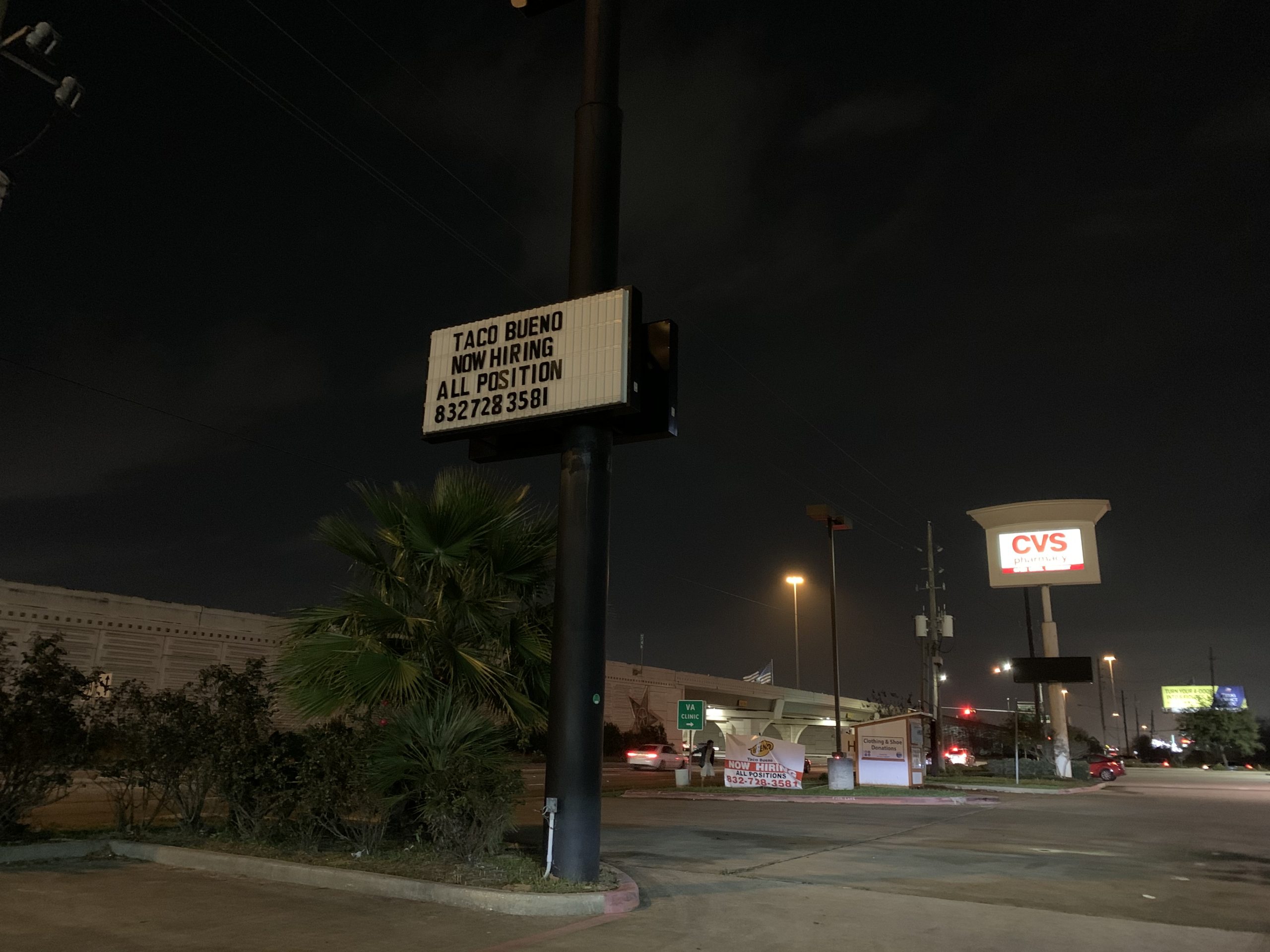 Welcome back readers, this week we find ourselves at a closed Carl’s Jr. Not for an update on the departed burger joint, but rather what will be taking its place. Back in April of 2019 Taco Bueno announced their intent to repurpose the building. For those unaware,  Taco Bueno is a mid size quick service “Tex-Mex” style restaurant. Take that categorization with a grain of salt, as their menu somewhat resembles Taco Bell’s.

Although a few advantages Taco Bueno has over Taco Bell would be, a higher reputation of quality, and a semi-local connection to Abilene, Texas. The company has had issues with ownership, and debt within the past few years and had emerged from bankruptcy only 2 months prior to the announcement of the Katy store.

As implied in the title this is actually Taco Bueno’s second attempt in Houston. In the early 80’s the company expanded into Houston in a venture lasting only a couple of years. Let’s hope that this attempt lasts a little bit longer. Although honestly, I’m a bit more partial to the idea of expanding Taco Casa. 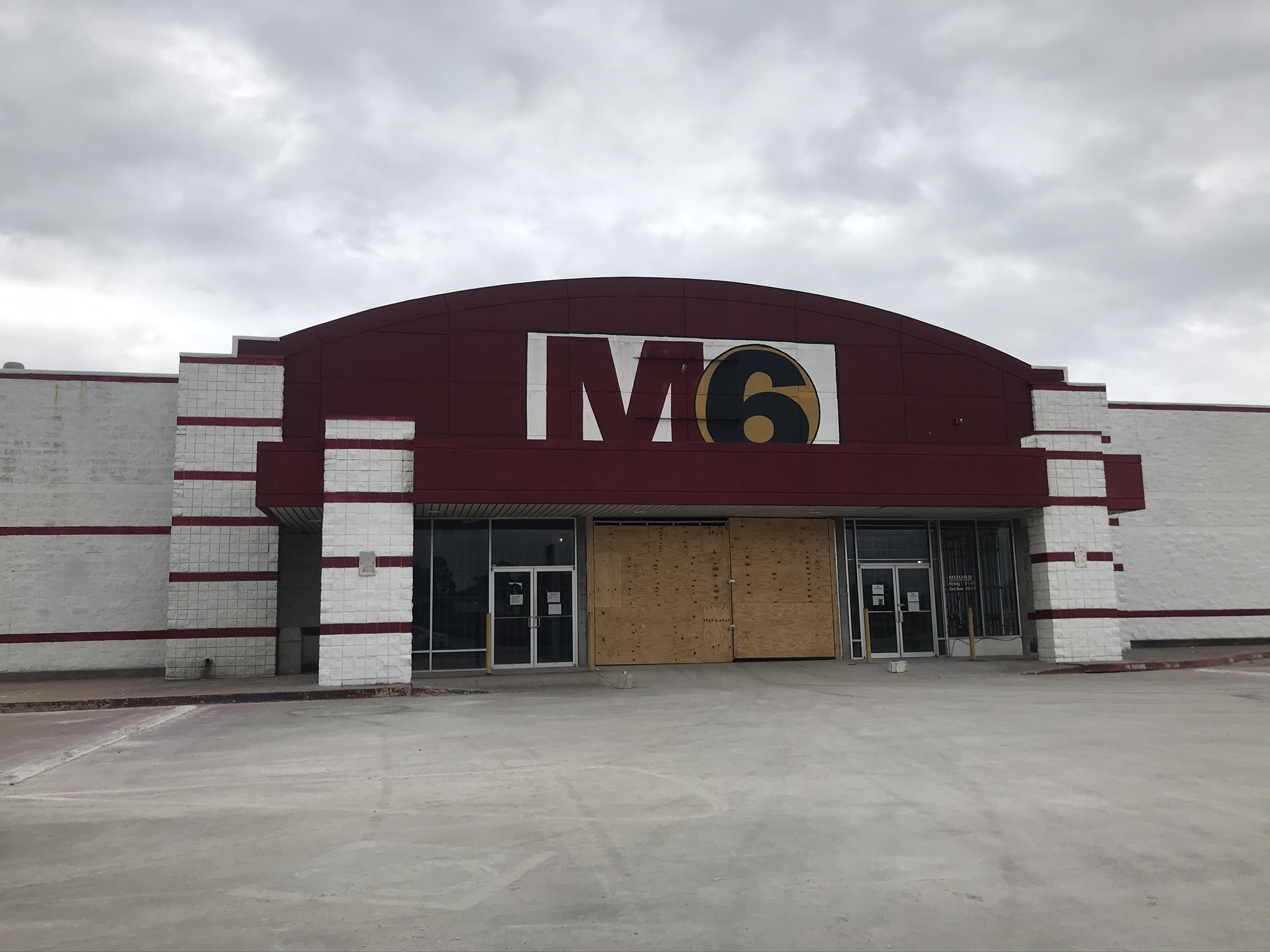 In a somewhat shocking update to the Mercado 6/Big Kmart saga, the flea market in West Houston has bit the dust. The store which I visited on two separate occasions in the past few years, has been purchased and gutted. The news seemed to break early this year around the time I published my last update. A few online reviews noted that “the store” was closed, but I naively assumed this meant individual shops. Driving back to the future 7-Eleven from Sunday’s post I noticed the vacant parking lot and stopped to snap a few photos.

Trying to look up what is going to happen to the building is unsuccessful. The company which bought the property was created solely to buy it. It does share an address with some other retail investment properties, but again it doesn’t point to much. From what’s going on inside it does look like the building shell may be saved, although we’ll have to wait and see if anything on the exterior is saved. 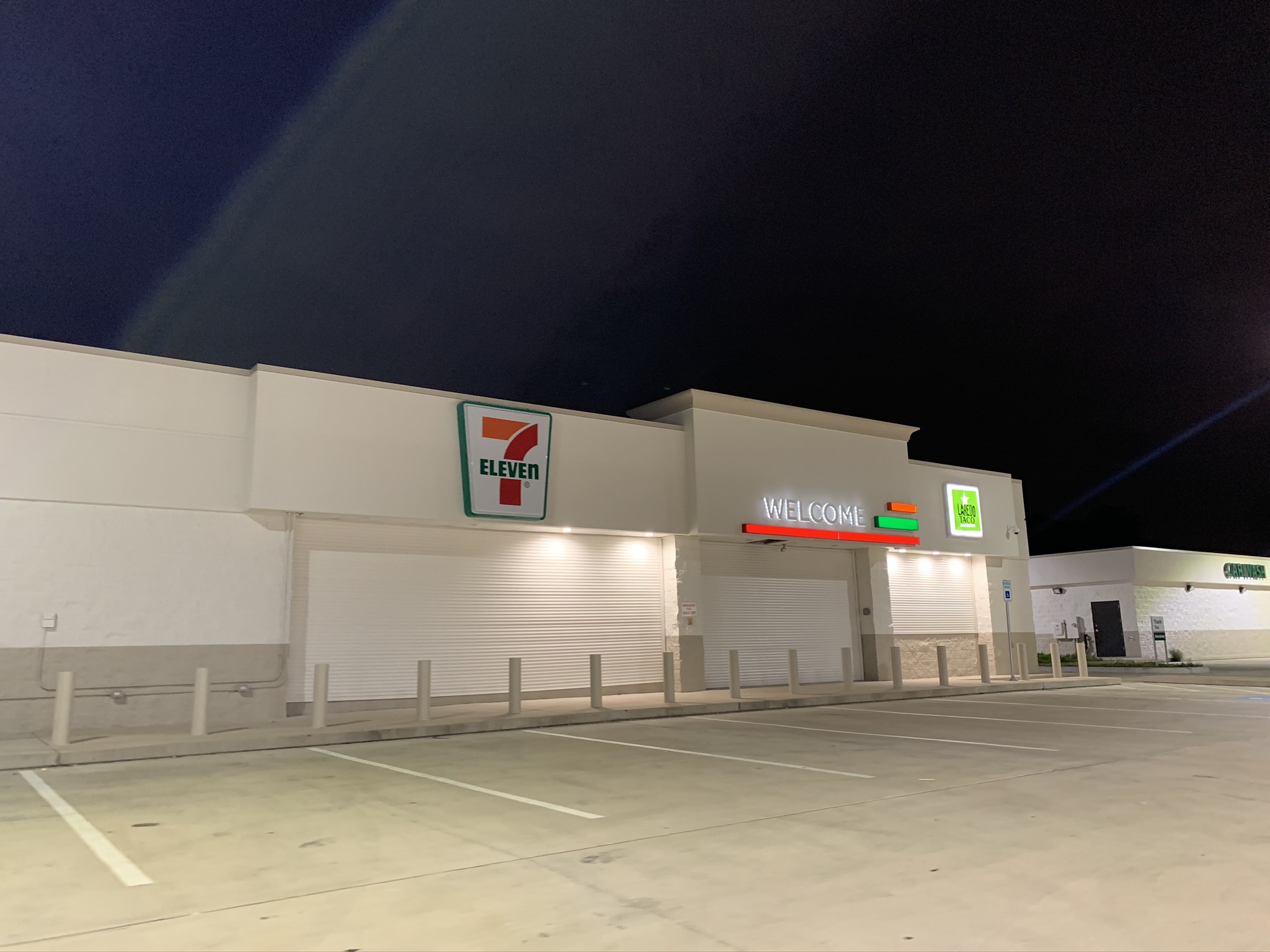 As with many of the subjects of my website, Houstonians of a certain age will remember when one of the largest convenience stores in the area was 7-Eleven. Originally founded in urgh… Dallas, the chain operated under the name “Tote’m” initially. It would not be until after World War II that the store would famously change their name to represent store hours of “7-11”. This name change would also allow for expansion into territory, like Houston, which was already held by the similarly named “U-Tote’m” convenience store chain.

Houston’s first 7-Eleven would open in 1953 at 5115 Allendale in Southeast Houston near Sims Bayou. With the company announcing plans to build up to 100 Houston area stores within the next few years. A number which they would not only quickly reach, but exceed. Finally after years of fighting a highly diversified market compared to many other parts of the country, 7-Eleven decided to Exit Houston in 1987 (Thanks to Aaron J. from Carbon-izer for helping me confirm). They sold their 270 location chain to Stop-N-Go who converted most, but not all locations over closing a few in the process.

In 2014 the first hint of the Slurpee Giant’s return to the Houston area was teased when 7-Eleven acquired the majority of Victoria Based C-Store Speedy Stop’s retail operations. Included in the purchase were four locations in the Houston Metro area. These stores had all previously been operated as Speedy Stops, but after the acquisition the branding was covered up and the Tetco name (another brand which was acquired) was used instead. This was kept until 2018 when some Tetco signs were replaced with 7-Eleven. During this time 7-Eleven would also acquire Stripes. The plan seemed to be to convert all stores into 7-Elevens, using Stripes as a distribution channel.

As mentioned earlier in the article, I took these photos around 2018. The reason I have been sitting on them for so long is I, along with many other Houstonians had been expecting the return of 7-Eleven. The acquisitions were made with quite a bit of fanfare, and with press coverage. The reality is that outside of being able to buy Slurpee’s and other 7-Eleven exclusives at Stripe’s we’re not much closer to having actual locations inside Houston city limits. At least this was what I thought until I took Eldridge Parkway home a few nights ago. 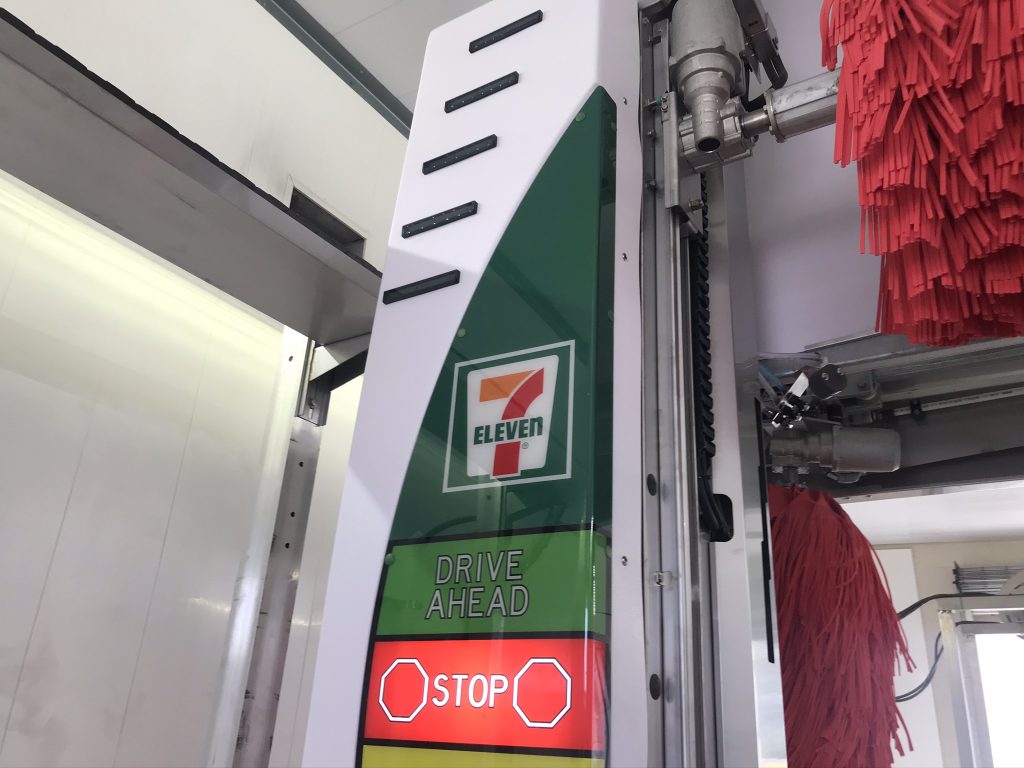 At this point it looks like the remodel is fully underway. Hopefully I can try driving by on a weekday and see if the shutters are open. If this is the case, we will likely have a new 7-Eleven within Houston city limits by summer.