Well, we’re coming to the end of July, which means it’s finally time for another biannual trip to Northwest Mall, before you read any further not much has happened. However, everything is still there, at present there are no plans for demolition. I have since been contacted by the group wishing to purchase and redevelop the land, my update is at the end of this post. 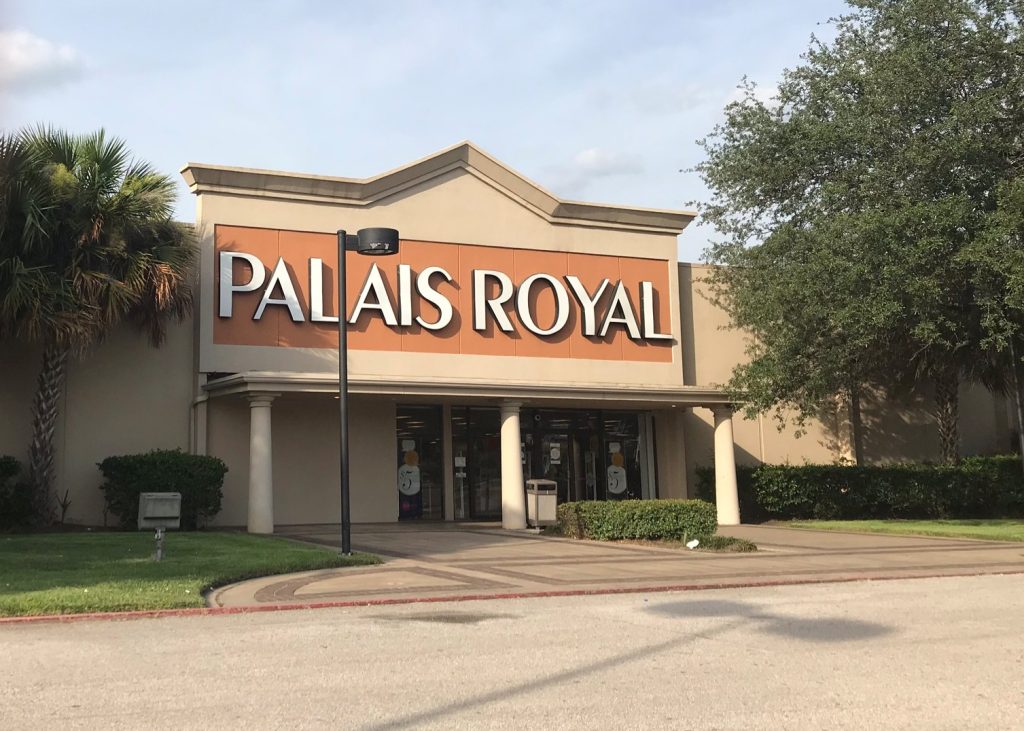 Nothing much has changed with Palais Royal. They are using the former mall entrance as a sales floor, as opposed to keeping it open. The exterior plants and grass are all well kept. 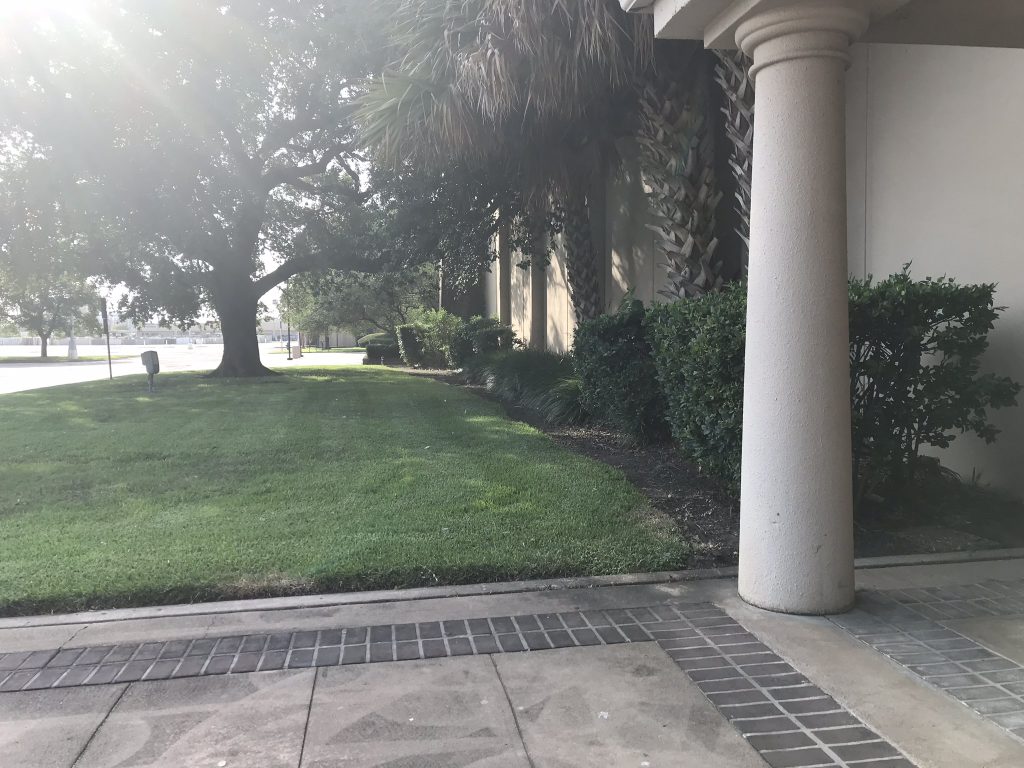 I wanted to include a picture to show that not only are the lawns and hedges trimmed, but the edging is even nice! 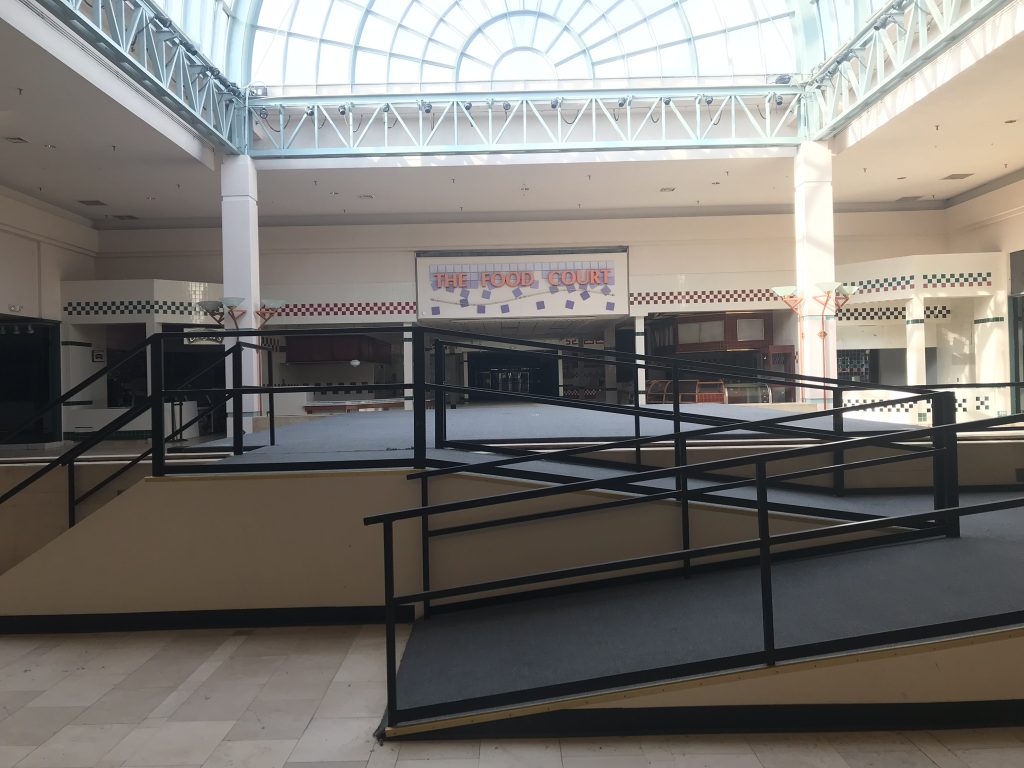 The stage is still assembled, which you figure they might try to sell if they were completely serious about selling the mall. 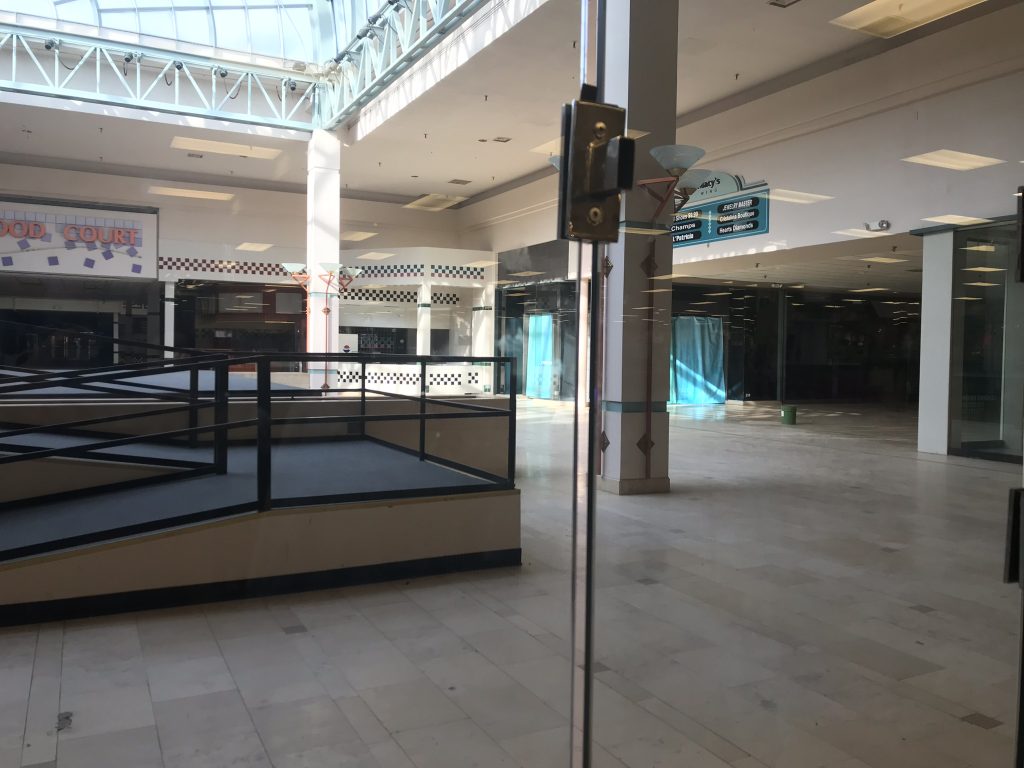 Some of the stray items left behind at Thirsty’s former location have been removed. 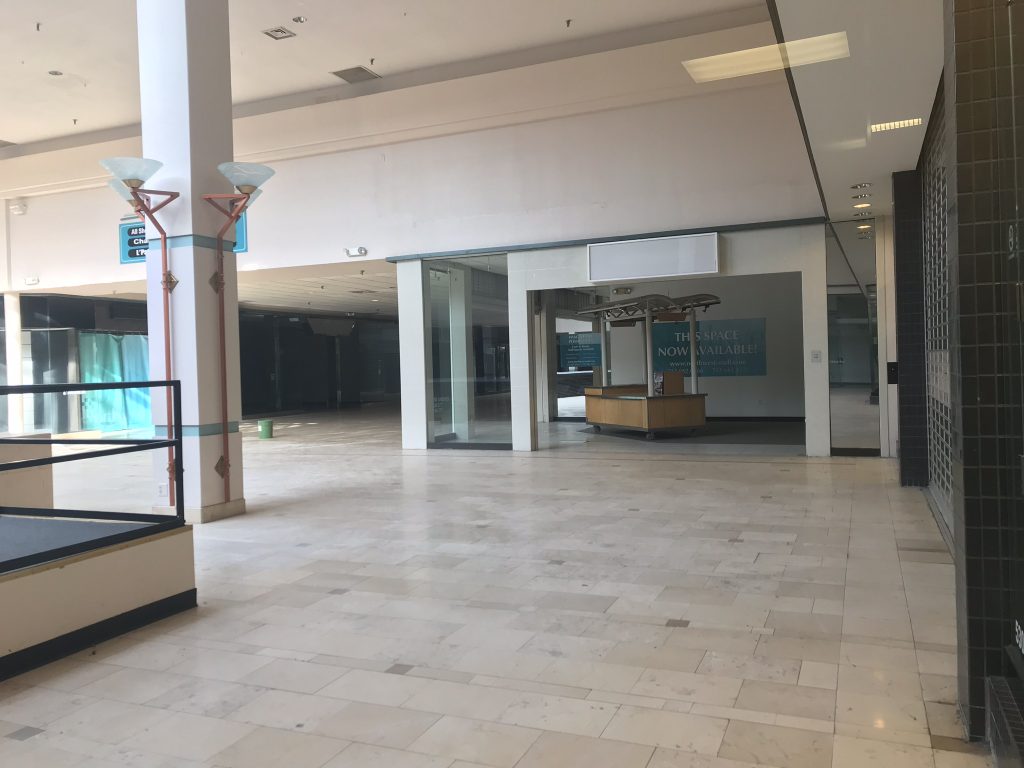 This cart is the final visible cart in the mall. I’m not sure if the carts have been sold yet. Prior to closing most of the carts were moved to the former Movie Theatre hallway. 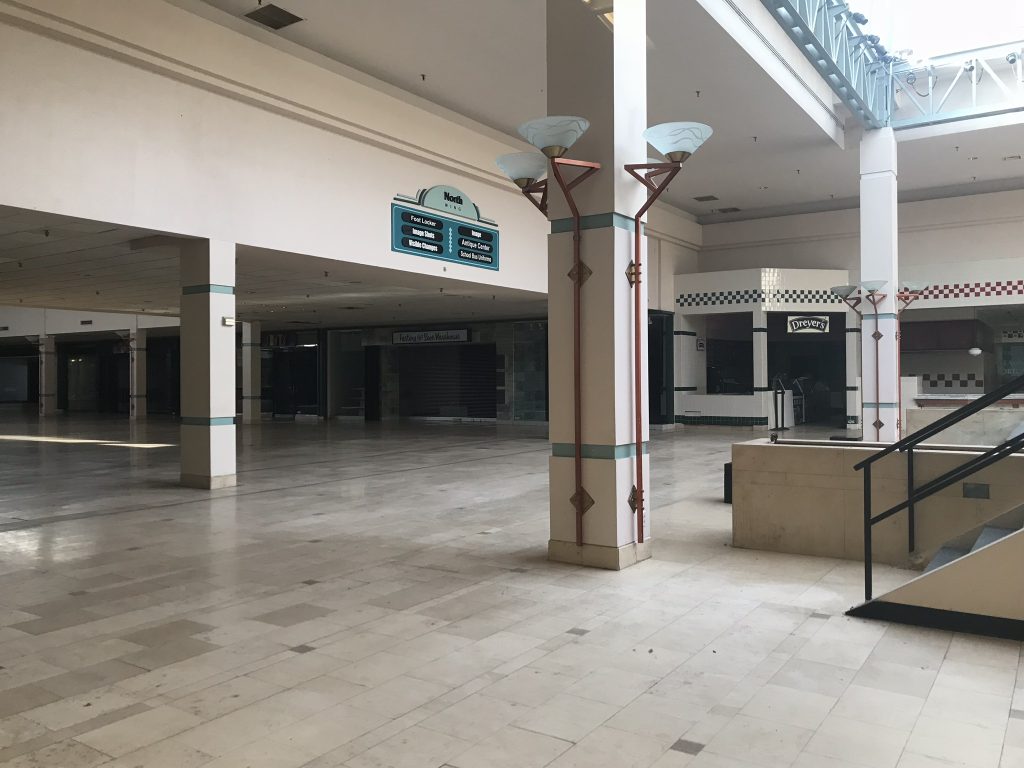 The Dryer’s signage remains attached to the building. Sticking my fingers between the glass I could tell that the A/C temperature inside the mall was either higher than Palais Royal or completely off. 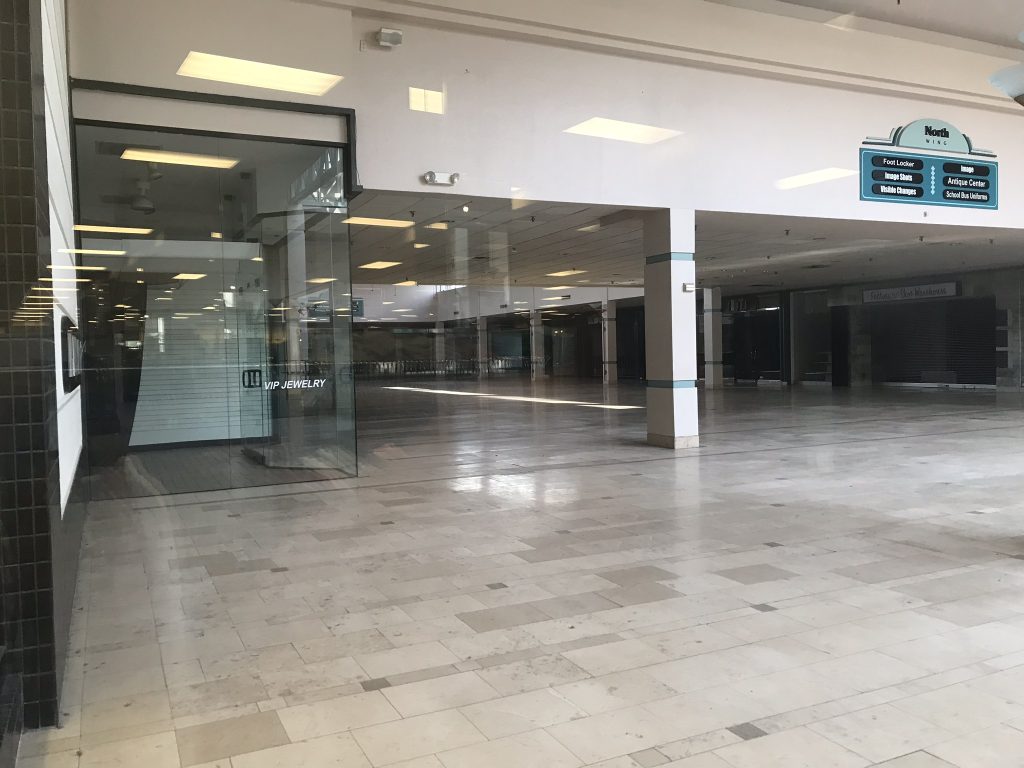 Looking down towards the former JC Penny’s entrance you can see that everything in the hallways has been removed. The former movie theater hallway no longer had carts or kiosks in it when it was converted to an emergency exit. 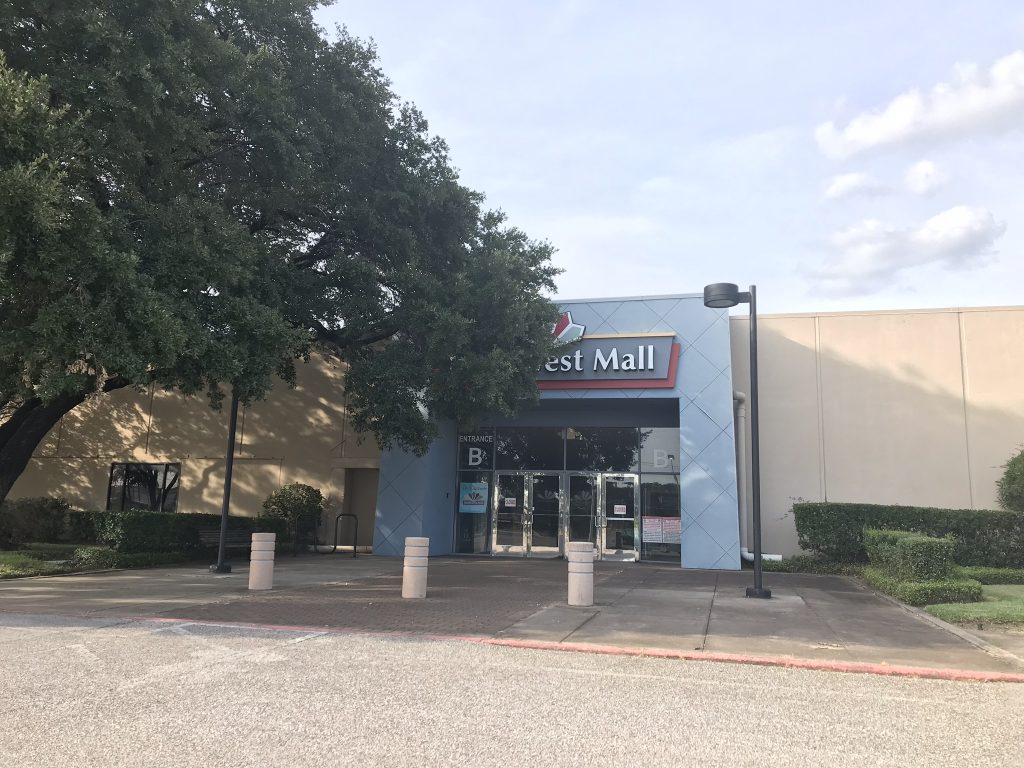 This is the final exterior mall entrance with any access. The movie theater hallway is open to allow access to the emergency exit for the club. However, you’re not able to access the rest of the building. 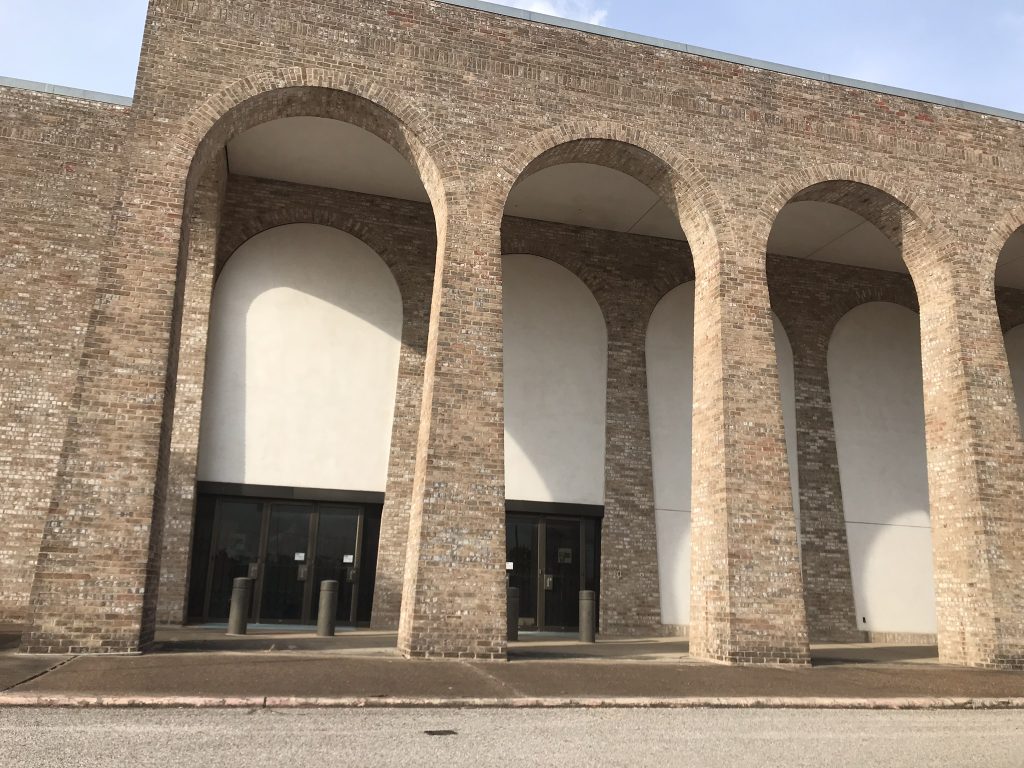 The former Foley’s remains untouched. Even the original F door handles remain attached. You would think that someone might attempt to make off with them, however, security seems to primarily patrol this side of the mall. The 610/290 interchange construction has died down enough that Entrance 7 could easily be reconnected with the feeder. However, it seems highly unlikely this will happen at this point. I truly believe this mall has its days numbered. This construction lot honestly, might be one of the few things preventing redevelopment. It’s likely that this government acquired contract has some sort of lease stipulation preventing the breaking of the lease without a penalty. The Northwest Mall is open for business along with 3 of the 4 business signs have been removed. These are on the former Macy’s building. The only remaining store from this sign has been Palais Royal for the past few years. The former front entrance, or “Entrance A” has been completely covered for a while now, construction dumpsters which were in the service courts have been removed. Again, all but the Palais Royal Sign has been removed. This was on the former JC Penny’s/Antique Mall building. I wonder why they have never made any attempts to cover the non-existent stores.

Unfortunately, I really think we’ve hit the end of any kind of full mall restoration. We may see retail-based redevelopment if the idea of placing the high-speed rail station there pans out. Otherwise, we must play the waiting game to see what happens next. If you enjoyed this update check out my past entries on the same topic.

7/24 Update: I was contacted by Michael Moore Regional Vice President of External Affairs for Texas Central Partners (The Company which is building the bullet train between Dallas and Houston) who informed me that Northwest Mall has officially been selected as the location for the Houston Station. He also said “Texas Central has an option on the land and will close after we finish our environmental review by the Federal Railroad Administration (FRA)”

This will prove to be a fitting use for the old mall. As opposed to another new shopping center they have chosen a unique modern design, which matches the nearby HISD buildings. Mr. Moore also provided a video showing what the proposed station will look like. https://texascentral.sharefile.com/d-s72321f159d842aaa