Howdy, folks, and welcome back to HHR! Today, we’re looking at a Lewis Food Town in a Former Albertsons. Located at 9725 Fondren Rd, Houston, TX 77096 I’d call it an Alberstown doesn’t really roll off the tongue, sounds more like an actual town to me. In my mind, Food Town is a store without much context or connotation. If you asked me to “picture a generic Food Town”, I’d have a hard time describing one to you. It’s not that I don’t know what their stores look like, I’ve visited a good few many. Rather, it’s that each store is so wildly different, that I have a hard time coming up with a cohesive description. The best way to describe a Food Town is simply by saying it still largely resembles whatever grocer previously occupied the space, with some Aggie Colors thrown in now and again. This former Albertsons still has many day one features of its décor in place over 20 years later, even after a recent remodel. As mentioned previously this reuse of decor is not specific to this store. It’s always an adaptation of whoever was in there before. Like this Food Lion, or this Randall’s, Food Town is a chameleon adapting to whatever situation they inherit. While this can sometimes lead to a “less than pretty” situation, like this Gerland’s (et al), the Food Town Albertsons stores are for the most part model examples. Being well kept by Albertsons, during their short life in Houston.

This store originally opened sometime in late 1998, likely August or September. By this point, Albertsons had been in town for only three years and had opened 24 stores in their new Houston division. While the building process had slowed a bit, with Albertsons cutting back from 10 stores/year to only four, the pace remained steady. This Meyerland store was built in the space of the former Braesgate Shopping Center. The center which was built in the 1970s originally housed a Safeway as the major tenant. Until, 1984 when Safeway moved to the former Weingarten across the bayou in Braeswood Square. The old grocery store wouldn’t sit vacant for long-serving as one of Houston’s earliest TJ Maxx locations until they hopped ship to the former Jumbo across the street in 1992. During construction, the entire Safeway shopping center would be demolished, and a new one would be built in its place. While the shopping center portion would continue to face Fondren, Albertsons would rotate the grocery store 90 degrees to face Braeswood. Construction on the new store would take about a year, starting in 1997.

As an Albertsons, this store included many adaptations not seen in the area before. If you’re not in the know, Meyerland is considered the center of the Houston Jewish community. While specialty grocers had operated in the area for some time, mainline grocers made little adaptations to their selections to facilitate their customers. While some obvious exceptions were made in terms of ordering more of certain products, and not stocking certain items that wouldn’t sell, the chains of Meyerland were relatively bland. However, Albertsons had a plan to change things up. In addition to carrying a wider array of Kosher products, this new store would include a Kosher Butcher, and a Kosher Deli, Kosher Bakery, and Kosher Coffee Shop. The store even featured a Rabbi Manager who was able to answer all sorts of questions. The response to the new store was seemingly tremendous. Seemingly kicking Kroger into high gear to build their own Kosher Deli, although even their current configuration at the South Post Oak “Kosher Kroger” is still nothing compared to what this Albertson’s did. These new features were in addition to standard departments, providing customers with a wide selection. By this point, Albertsons was the only major chain grocer still operating in the “heart” of Meyerland. Their only competition was a tiny HEB Pantry Foods, which barely had room for a butcher, much less a Kosher one.

In 2002 Albertsons decided to call it quits in Houston. The chain had grown to 48 locations and had purchased at least two more lots which they were near acting on. Underperformance is the accepted reason for Albertson’s departure from the Houston market. Seemingly they felt incapable to compete against HEB, and Wal-Mart, in a war which Kroger and Randall’s seem to be slowly losing as of late. Food Town would not immediately jump on this location. Although they had been able to purchase a single Albertson’s location upon exit, most stores ended up going to Kroger or Randall’s, with a scant few ending up with HEB. This location would end up sitting vacant from 2003-2006, with the Kosher manager actually jumping ship to HEB, along with much of their clientele. Prompting HEB to expand the Pantry Foods store adding tiny departments, and expanding their Kosher selection. In 2006 Food Town announced their plans to begin renovations of the former Food Town. As of 2022, this is one of their most up-to-date locations. Featuring not only self-checkouts (which are being slowly rolled out chain-wide it seems) but also Online Ordering for Curbside pickup a first for a Houston independent grocer! I’m thinking about trying this out, let me know what you guys would think of a review! 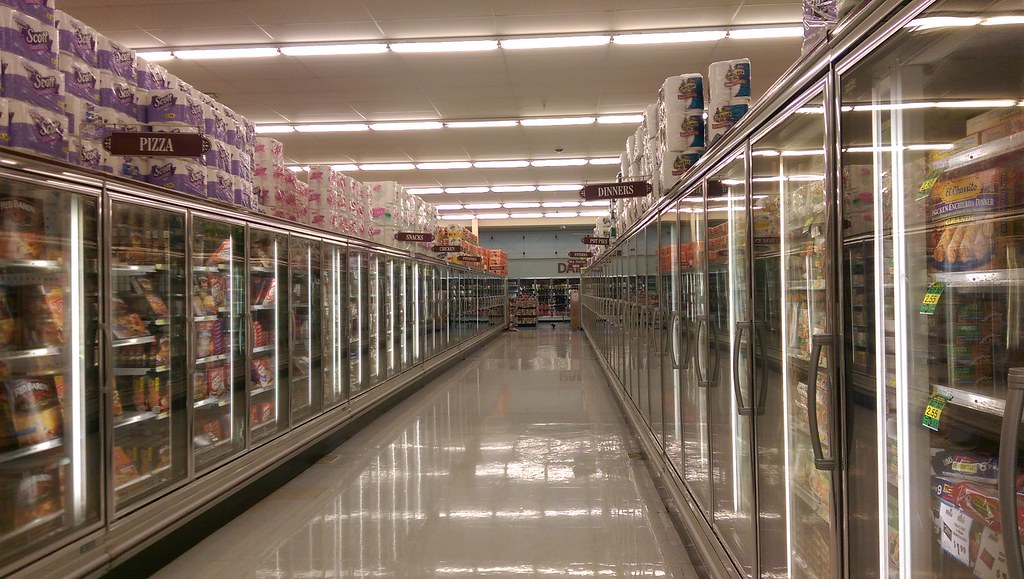 As this of course was Food Town the remodeling would be scant. The biggest changes that would happen as in any other Food Town would involve covering up, and service departments, and adjusting signage. Generally adjusting signage simply meant taking down anything non-relevant, and not adding much. However, due to all the Kosher departments in this store, the signage would be completely removed and replaced with Maroon painted lettering applied just above the departments. It’s not the elegant huge signage you would expect from a Green Awnings Albertsons, but it gets the job if nothing else. If you’re in the area, I’d recommend stopping by to check this relic out. All of the original wall covering is up, although it’s starting to peel in some spots! With the recent Food Town remodels, I feared the worst for this location, but thankfully it has been spared, and given self-checkouts!