Howdy folks, and welcome to Houston Historic Retail. Today we’re doing something we haven’t done in a while and looking at an abandoned retailer, a former grocery store Ziegler’s Foods, located at 2308 FM 517 Rd E, Dickinson, TX 77539. The empty store has a fascinating backstory and unclear future, so let’s jump right in. 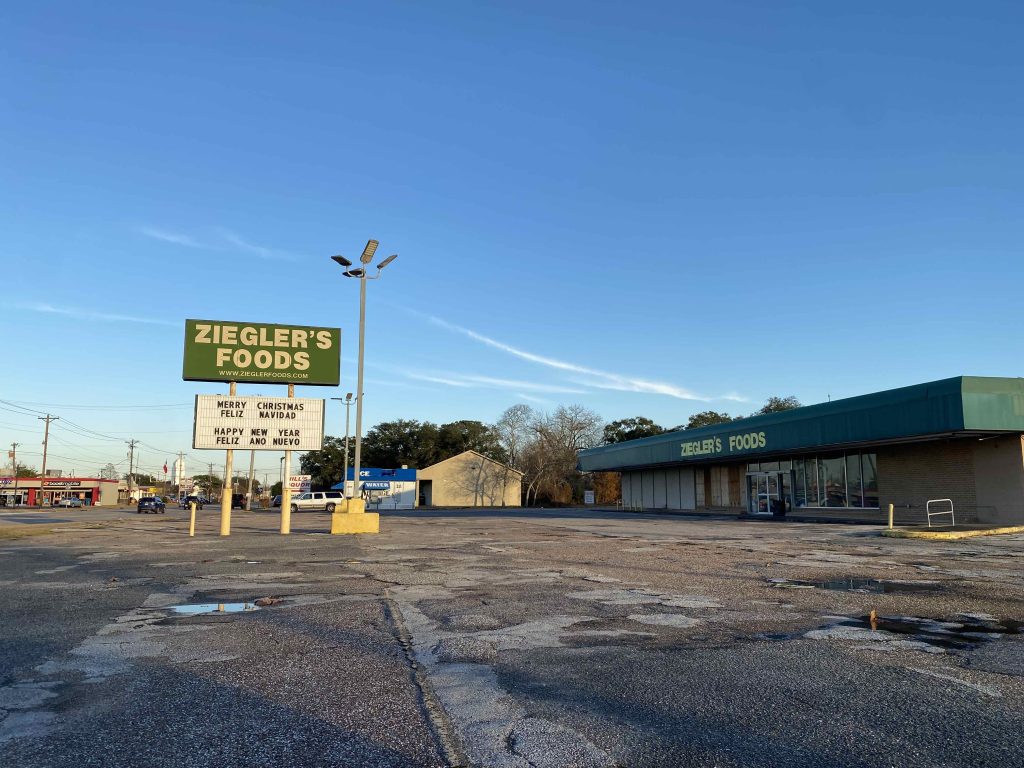 The building now used by Ziegler’s came into use, likely sometime around the 1950s, initially as Klecka’s Food Market. The Klecka family hailed from Czechoslovakia and, in the 1940s, opened a Department Store in Dickinson, followed shortly after by a second location in East Bernard. The Klecka family chose smaller towns to help avoid competition. Shortly after establishing their dry goods concerns, the family decided to open a grocery store in the bustling Dickinson. The department store, on the other hand, would not be as lucky, closing sometime before the 1960s. For the next 30 years, Klecka’s Foods would thrive as Dickinson grew. However, as the town grew, so did the competition. In 1974, the family chose to sell their Dickinson store to A.J. Gerland and move their remaining grocery operations to East Bernard. During the 70s, Gerlands was on an expansion tear, looking for older, smaller stores to serve areas left behind by companies like Safeway and Kroger. Thankfully for Gerland’s, the new stores would be on I-45, leaving their store as one of the only options in Dickinson Proper. As Gerland’s continued to grow, so made their footprint, and the company began to close smaller locations. In 1990 facing possible closure, store manager Jerry Ziegler agreed to jointly purchase the store with A.J. Gerland and operate it independently of the Gerland’s chain as Ziegler’s Foods.

Jerry Ziegler knew his market. He was serving those who could not or chose not to make it to the chains on the Interstate. Ziegler continued to work with Gerland for the next five years until buying out A.J.’s shares in 1995. Business at Ziegler’s continued, as usual, serving the local market for years. Jerry was seen not only as a grocer but a community member, sponsoring multiple charities and events that all benefitted the town of Dickinson. In the mid-2000s, as Mr. Ziegler’s role in the community grew, he passed on leadership and ownership of his store to his daughter. In 2011 Mr. Ziegler, unfortunately, passed away. However, the store would continue on. In August of 2017, Ziegler’s Foods was flooded during Hurricane Harvey, forcing the store to shut down. Attempts to reopen the store would begin immediately; however, with insurance less than helpful, the store has continued to sit vacant. The space was temporarily used for storage by Keyworth’s Hardware but has since been remodeled on the interior. Exterior work involving a new facade is still in the plans, with the most recent update coming in 2019. The family seems intent on reopening the store, but not unexpectedly has been quiet during the past couple of years. As of 2022, no new grocers have sprung up in this area, making it a prime time for Ziegler’s return!